Farage as Wilkes......the threat of the Scottish and the French...the dangers of knowing History.... 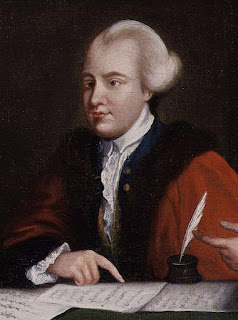 Farage as Wilkes......the threat of the Scottish and the French..History revisited
Some months ago I heard a story . Someone had claimed that the only use of History was in a Pub Quiz. I began to rave about this and then began to reflect. It disturbs me and yet it is worthy of reflection. I began to think about the similarities between the political elites of today and the political elites of the 18th century. A figure emerged from the 18th century in my memory and I began to see connections between both John Wilkes and Nigel Farage of today's UKIP.
John Wilkes (17 October 1725 – 26 December 1797) was an English radical, journalist, and politician.

He was first elected Member of Parliament in 1757. In the Mi dlesex election dispute, he fought for the right of his voters—rather than the House of Commons—to determine their representatives. In 1768 angry protests of his supporters were suppressed in the St George's Fields Massacre. In 1771, he was instrumental in obliging the government to concede the right of printers to publish verbatim accounts of parliamentary debates. In 1776, he introduced the first bill for parliamentary reform in the British Parliament.

During the American War of Independence, he was a supporter of the American rebels, adding further to his popularity with American Whigs. In 1780, however, he commanded militia forces which helped put down the Gordon Riots, damaging his popularity with many radicals. This marked a turning point, leading him to embrace increasingly conservative policies which caused dissatisfaction among the progressive-radical low-to-middle income landowners. This was instrumental in the loss of his Middlesex parliamentary seat in the 1790 general election. At the age of 65, Wilkes retired from politics and took part in progressive social reforms such as Catholic Emancipation in the 1790s following the French Revolution. During his life, he earned a reputation as a libertine.
Wilkes set up a newspaper and called it the Northern Britain. It railed against the 1707 Act of Union between England and Scotland. He felt that this union would bring poor immigrant workers from Scotland that would steal English jobs. Wilkes was born in London in 1725 and was a thorough rouge yet also a fervent patriot of England. He was at times involved in trade, was an author and a MP. Wilkes firmly supported Whiggism and hated the Scots and was outraged as what he saw as the Scottish takeover of the English administration. Whiggism was an English political and historical ideology that saw English history as the progression of a strong ethnocentricity based on Protestantism, an ancient constitution, limited monarchy and a special and expanding place for England in the world. In contemporary politics Whigs supported policies that upheld these principles and continued their progression and improvement. There was also Scottish Whiggism, based around a Presbyterian-aristocratic ideology. Wilkes scorned the concept of ‘Great Britain’ and felt that the Scots “unchangeably alien, never ever to be confused or integrated with the English. Wilkes and his followers, called Wilkes, sought to protect the great building blocks of England – the Protestant succession, the revolution of 1688, the Magna Carta and English freedoms – the great elements of English Whiggism, all of which they felt to be under threat in the 1760’s by a rising sense of Britishness. The Wilkites argued that the Scots were politically dangerous. They had a taste for arbitrary power and rule – had not the hated Stuarts come from Scotland?Their lords were tyrants while the common people were slaves and passively obedient to their masters.

The march of the highlanders in 1745 burned freshly in peoples’ minds. With such attitudes history and upbringings, how long would it be before they infected and threatened the building blocks of England? Numerous cartoons such as A View of the Origin of Scotch Ministers & Managers depicted the flocking of Scots to England with bad or evil intentions and a tendency to scratch each others’ backs. Wilkes wrote that “no Scot ever exerted himself but for a Scot.” Protests and rallies were heard across England - “more opportunities for Scots meant fewer perks for Englishmen.”Wilkes himself was furious that he had lost his attempt to become first British governor of Quebec to James Murray. Does that not remind you of a certain UKIP leader on the East European Issue. Does this not remind you of things written about Islam and things said by Britain First. Does this not remind you of things heard in recent elections? Does not Wilkes sound like those railing against multiculturalism and the progressives.......
....
Wilkes railed that England had thrown awy its empire and its gains from the French in the Seven Years War. This was because Wilkes argued clever French negotiators overcame the British. Does that not sound like UKIP on the European Union? Could not Farage have made this speech “The French king, by a stroke of his pen, has regained what all the power of that nation, and her allies, could never have recovered; and England, once more the dupe of a subtle negotiation, has consented to give up very nearly all her conquests…What right have we to expect that an indulgent Providence will again in so distinguished a manner stand forth our friend, when we have thus wantonly given away to the enemy of our religion and liberty, the fruits of all the signal blessings heaven has poured down upon us? Or indeed this “England in her wars with France should never sheath the sword till peace is absolutely concluded. The wicked policy of that nation, their superior address in negotiation, their total disregard of faith, and their known arts of spinning out treaties merely to gain time to recover strength, without any real intention of bringing them to a conclusion, have taught us this lesson, altho’ we have seldom been prudent enough to put it into practice.
The North Briton, No. 18, October 2 1762.
The North Briton, No. 28, December 11 1762.

At the end of Wilkes career he once heard someone shouting “Wilkes and Liberty” He turned to the old lady who had shouted it and said “shut up you olf fool, that outlook was over long ago”. Wilkes claimed he stood up for the oppressed and the ordinary people he ended his life supporting the establishment and the rule of the upper classes. Modem UKIP is made up of ex Tories, it fools many in the white working class into thinking that it stand up for them. It is in favour of privatisation, the market economy and the rule of the public school, city trader background that Nigel Farage comes from. Like Wilkes, Farage must be seen in that way.
The greatest irony was then that I found Radio 4 had made a programme in its Long View Series comparing Farage and Wilkes.
For those who feel that History is only of use in the Pub Quiz I feel that the betrayal of the working class voters seduced by UKIP will be exactly the same as those seduced by Wilkes. The Tory Governments that came after Wilkes were the most brutal, the most violent, the most powerful destroyers of Liberty. I truly hope that the rise of UKIp does not foreshadow a similar Conservative domination of UKIP politics for the next thirty years.
I see that government in the eyes of Boris Johnson , Iain Duncan Smith and Neil Hamilton. Some will say that I am obsessed with UKIP and naively dismiss my words but those who say that I suspect have no knowledge or awareness of History. When we do not learn from history we quickly repeat it.
I like this story …...Dr Johnson abhorred John Wilkes as a man of no principle. Wilkes was a member both of the notorious Hell-Fire Club and of Parliament; he was a demagogue, a rake. A stay in the Tower for a near-treasonous pamphlet made him a hero as a defender of liberty, but Johnson scorned him as a "patriot" in the 18th-century sense - a factious disturber of government. "Patriotism," Johnson sniffed, "is the last refuge of a scoundrel." I understand Dr Johnson's view and apply them to Mr Farage. And make a claim for the teaching of History thematically..
Posted by Any Human Heart at 12:35