The Secret Life of Emily Dickinson 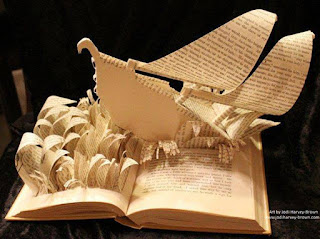 The Secret Life of Emily Dickinson

There is no Frigate like a Book
To take us Lands away,
Nor any Coursers like a Page
Of prancing Poetry –
This Traverse may the poorest take
Without oppress of Toll –
How frugal is the Chariot
That bears a Human soul.

In the two years before her death, Emily's health began to fail.  This was 1884, just a few years after she buried her mother.  She and Lavinia had nursed their mother for her last seven years of life.  How frightening it must have been for Emily to face being an invalid - she knew too well its pain and loss of dignity.

In August of 1885, Emily received word that her dear friend, author Helen Hunt Jackson, had died.  Emily and Helen were both born in Amherst during the same Fall, and reconnected years later.  It was just months before, in writing to Helen after learning of her recent fall and broken leg, that Emily wrote this poem:

Pursuing you in your transitions,
In other Motes --
Of other Myths
Your requisition be.
The Prism never held the Hues,
It only heard them play --


[Member Mary Narkiewitz brought this poem to us last year on this date - I found it and present it here.]

At the same time Emily's health began to fail, she was told that Judge Otis Lord had died - the man she loved with whom she contemplated marriage.

For the next two years - the last of her life - Dickinson remained an invalid, rarely leaving her bed.  Emily wrote very few poems during these years - one is quoted above.

By the end of 1885, Emily began to refuse medical examinations. Feeling weaker and weaker, she sank into her pillows.  She wrote her last poem:

And all that Heaven was --

As May, 1886, approached, Emily seemed to know her time was limited.  In early May she wrote the letter, to her two favorite cousins, from which her epitaph would come:

Emily had written the words "Called Back" once before to her "Little Cousins."  In a letter dated January 14, 1885, Emily wrote of a popular novel by Frederick John Fargus - its title: Called Back.

Emily closed that earlier letter to Fanny and Loo Norcross:   "That we are permanent temporarily, it is warm to know, though we know no more."  [Did you notice the words "know no more" may be taken several ways? That's our Emily!]

Emily's funeral service was held at the Homestead.  Emily wore a robe of white flannel and lay in a white coffin.  The service was conducted by George Dickerman, who read from Corinthians.  Colonel Thomas Wentworth Higginson read Emily Brontë's poem "Last Lines."

Emily's coffin was placed on a bier of pine boughs adorned with violets.  Lavinia placed two heliotropes in Emily's hand and whispered that they were for her to take to Judge Lord.  At her request, her coffin was carried to its resting place, next to her parents, at West Street Cemetery.

“The grass of the lawn was full of buttercups and violet & wild geranium.”  - Higginson wrote about Emily Dickinson’s funeral, May 19, 1886:


She died—this was the way she died.
And when her breath was done
Took up her simple wardrobe
And started for the sun.
Her little figure at the gate
The Angels must have spied,
Since I could never find her
Upon the mortal side.

**thanks again to Susan Snively we have this information on the poem.  It is #154 in the Franklin Edition, and dated 1860.

Susan also wrote us this message:


"Surely Emily's funeral was a poem in itself.  Higginson's comment, "perfect peace on the beautiful brow" is a comforting tribute."