Luciarno`s ` Secret Library in the Heart of the City

Luciarno`s ` Secret Library in the Heart of the City 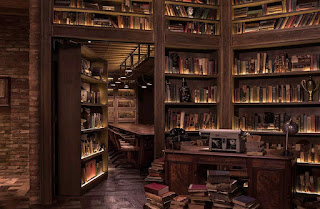 I have a student he is in his late 70s. Shall we say he is  italian . He spent a lifetime in the catering industry, He attends three philosophy courses a week. Today I visited him at home. It takes a lot to stun me. I found a small flat in the middle of Swansea filled with books and pictures and artefacts. I saw his art work and I saw all the books he had collected over the last 30 years.
He is a n modest man and he told me that I was the first person other than his family to have seen this collection. There were psychology, philosophy, literature, art , cookery and novels there. I have met many people over the years keen to show off their knowledge, their capacity for creativity, to show how artistic, how insightful they are. I am and have been like that. I realised how the things that I have taught , the things that Jenni Jenkins has taught this student have gone in deeply, been thought about, books have been bought because of the things talked about and discussed.


It brought tears to my eyes to see the collection there in a small flat in bed sit land in Swansea. Perhaps in the end all we are are the books we have collected as a record of a lifetime. The pain , the pleasure the memories of what we once read and where we read it. The memory of people who gave us the books and the collection as an outer projection of our inner selves.
Some years ago I was bought a picture of a man climbing the ladder in a vast library. I have now seen that library in that small flat in the heart of Swansea City. It makes me think of how little we know of what lies behind those closed doors we never open.

I suspect that many of my other students would be surprised at those books I saw today. I might have been guilty myself of seeing the tough exterior of my student, a rough diamond, a Greek working class man from Northern  italy  And yet I always suspected that the influence of both the old style  italian  Communist party he got from his father and the subtly of italian spirituality  he got from his mother gives him a many lensed camera upon the world and on its myriad meaning. I saw a well read Renaissance scholar there and I am delighted and very very honoured that he showed me this morning his flat, his life and his knowledge. I thought of Camus observation as I walked away from his flat

“The only way to deal with an unfree world is to become so absolutely free that your very existence is an act of rebellion.” here's to you Alecto
Posted by Any Human Heart at 13:59