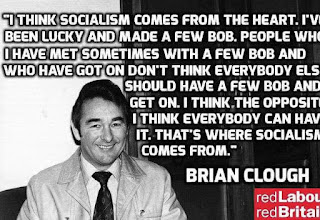 Why i am an Eco-socialist ...sometimes " I can't see the road for the rain in my eyes"
In the end when you look at the faces of Jeremy Corbyn Caroline Lucas, and Leanne Wood their faces so aptly reveal their soul.

In the end it comes down to who you are really deep inside. Its the emotion for me of seeing my son, seeing my lover. It comes down to reaching outwards, it's about knowing the history, literature and culture of Europe. It's about experiences of traveling, knowing the smell of the air in the countries of Europe, it's about smiling about our own odd little ways and theirs. Its about knowing what we share together and not what keeps us apart. Its about coping with the fear of change within ourselves and not about denying it and projecting it onto the other. Its about how the Soul of humanity under Socialism is more alive , more expansive and more aware.


It's about knowing and feeling in your heart, tolerance, understanding for the refugee, the victim of domestic abuse, the broken and the outcast. It's about daring to think in new ways it's about crossing over to new solutions and new perspectives. It's about not liking self assurance, and for those who are blaming the other, the little Englander and the simplistic Tory analysis of the Daily Mail.
It's about seeing how Shakespeare was influenced by those European ideas stretching back to the Greeks. It's about seeing how the latest edition of Big Brother shows how important the works of Freud and Darwin were and are. It's about celebrating both popular and high culture and k owing what they are. It's about appreciating that Nietzsche was not a Nazi and that Margaret Thatcher was no friend of the Welsh or women. It's about seeing situations with new lenses and new filters. It's about understanding that we make new wines in both new and old vessels. It's about seeing the Mediterranean Sea and smelling the air. And finally its about possibilities, hope and respect. That is why I am an Ecosocialist appropriately and deeply within my heart.

Its about the symbolism and faith in Socialisn. Its about how by looking at the threat of Isis, we do not forget the evil and poison of the far right. Its about what will come next if we forget the true nature of the Conservative party .. Its about the fact that the right-wingers worship the “free market” and the privatization of the NHS .I look at Theresa May, and Boris Johnson and I feel a revulsion deep down in my soul, in my mind and see them as abominations to all I have ever learnt, read, or felt. I would rather be a rebel than a slave.I have stood in the dock, lost three houses and been without a bank account and been homeless. Yet i have never sought to blame someone who was darker skinned, has a different sexuality or faith or philosophy. I have never been a Tommy Robinson character locked on the external locus of blame..that is why to the very end I will be an Ecosocialist . In the words of Oscar Wide "Every saint has a past , every sinner a future" Life is a lens through which we see the world and its meaning and that its not my fault if you see the world through a frosted single piece of glass. I would rather be a rebel than a slave...my sight may be dimmed but my lenses are wide numerous and multi-dimensional...and yours you bluekippers ? I think not... sometimes I cant see the road for the tears in my eyes......