Robinson and the insecurity of the white male

I'm so annoyed with the left of politics who have shouted down people as racist for daring to mention what's going on now which has allowed the likes of Robinson and his Ilk to take centre stage. Martyn, it really is your fault!!!! 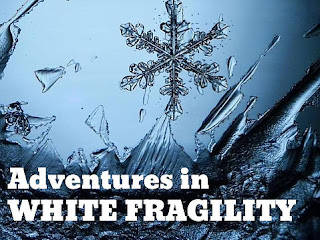 Robinson and the insecurity of the white male.. The Tommy Robinson saga revealed itself yesterday as the litmus test of ontological insecurity. The far right screamed and the hard right church of insecure masculinity just did not get it. The conspiracy theorists raved and spat. They were male yet insecure in that They screamed and shouted ...they claimed they were exposing paedophiles yet they were only interested if the paedophile had a darker skin. They conveniently forgot about the EDL man charged with the same crime. They forgot that Tommy's actions would simply risk freeing a paedophile..


They wanted their country back but knew nothing of legal process and of law They threatened gay journalists, politicians and the police, they treated social war on the liberal left..
Even getting the softer right to admit that anything was wrong with the Robinson approach was like trying to get the essence of liberalism out of the bricks of the Hitler bunker. When you did they screamed ad hominems like it was projectile vomit. It was an external locus of awareness not an internal ontological one. It was the Left that was to blame, they hated the expert, the historian and the social scientists. The Left were the cause not the bankers; the system and the market. To them Tommy was in Calvary be was their messiah the distilled essence of hate. The fear of the other the different was clear.. they were white males; insecure projecting, displacing; afraid the inner Tommy Robinson that has possessed so many will not go away till we know ourselves, know our insecurities and fears. Till then he will not go away.

Graham mallaghan makes this very interesting point  " And another EDL activitist - also a fine aryan - groomed, raped, and killed 15 year old Paige Chivers in Blackpool a few years back, and it doing life for it. His flat was a destination for vulnerable girls whom he plied with drugs and booze before raping them. He killed that young person because she threatened to expose him. He had previously been a BNP activitist. And Jason Connolly, who killed Baby P, was obsessed with the Nazis and a follower of present day far right movements. He had an IQ of 75.

It is darkly amusing how many followers of the far don't realise that Iif they got the fourth reich that they long for, many of them would be loaded into cattle trucks shortly after its establishment. With his record of persistent criminality, Yaxley-Lennon/Robinson would be one of them." 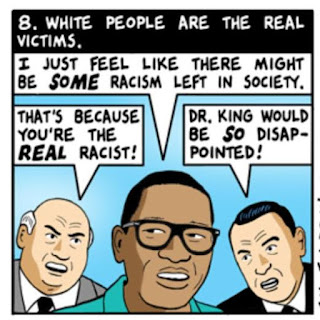 
Vangie Castro
Having hard conversations with people about race and intersectionality can be extremely uncomfortable, especially with my white friends. Currently, our political climate has made it difficult to go about your day without being bombarded by some kind of call to action, for this cause or that, or call your representative and tell them to vote “NO WAY!” However, as a person of color, who is also queer, I’ve lived my whole life suffering under the yoke of intersectional oppression. I’m cool! I can keep going without being too worried or anxious about what’s going on in the world. I just prepare for the worst and hope for the best.

I wake up every day expecting some form of microaggression or another to be peppered throughout my day. Last week, we were doing a presentation on microaggressions and how to spot them when you see one. I asked if anyone has dealt with a microaggression or seen one happen. I told the folks in the audience I could probably go all day giving them several different examples that have happened to me, just during work situations.

The one I like to tell was the time I was going to a hotel and presenting a training in one of the conference rooms. I walk up to the front desk to ask them where the training was being held.

Front desk person: “Oh, housekeeping is on the 2nd floor.”
Me: “No, I’m actually putting on the training for [insert organization name here].”

He then proceeds to point me in the right direction, and I was on my way. Mind you, he didn't apologize for assuming I was there for the new housekeeper training.

When I arrived at the room, my Program Coordinator was already there, and I asked her did they try to send her to the 2nd floor, too. She looked at me puzzled, and I told her what happened. She recalled that she said the exact same thing to the same front desk person, and he automatically sent her to the room where the training was. She is white, just in case you were wondering. She said she probably got there maybe five or ten minutes before me.

However, when I tell this story to people I don't work with, many will try to invalidate my experience and say that either A) I am being too sensitive and reading into things, or B) he didn’t mean it that way. Which I truly believe white people say so they can feel better about the world we live in and that it’s not as racist or sexist or homophobic as it actually is. This is where a lot of my white friends have failed and faltered when it comes to understanding their own “White Fragility.” To become a real ally, accomplice, advocate, or whatever you want to call yourself, one must admit they are also part of the problem they are trying to fix.

Dee Sabol, our Executive Director, wrote about this in her recent blog about white privilege and white responsibility, what that means and what that looks like. She also brought up the term White Fragility. The term was coined by Robin DiAngelo, who said “White Fragility is a state in which even a minimum amount of racial stress becomes intolerable, triggering a range of defensive moves. These moves include the outward display of emotions such as anger, fear, and guilt, and behaviors such as argumentation, silence, and leaving the stress-inducing situation. These behaviors, in turn, function to reinstate white racial equilibrium” (2011, pg. 57).

Basically, when a person of color calls out a white person’s privilege a myriad of emotions well up inside the white person that comes to the surface as guilt, shame, denial, sadness, and frustration. Depending on your toolbox and coping skills it can manifest itself as defensiveness, anger, and tears. White tears are dangerous, and many folks of color have written on the dangers of white tears. The tears of white women have killed young black men or got them strung up in a tree or dragged behind a car. The tears of black, brown, native, LGBTQ+ (unless they are white), and non-able-bodied people are discounted, minimized, or completely ignored.

Whites who position themselves in self-defense against attacks of racial bias turn the narrative around and place themselves as the “real” victim, who’s being blamed, attacked, and used as a punching bag for race and racism in society. DiAngelo (2011) describes this as positioning themselves as morally superior while at the same time concealing the power of their own social location.

In Sara Watts (2016) article “White Fragility is Real: 4 Questions White People Should Ask Themselves During Discussion About Race,” and the four questions are:

1. Am I trying to change the subject?
2. Am I using inappropriate humor to deflect?
3. Am I getting defensive or angry?
4. Am I going out of my way not to focus on “the negative?”

Watts concludes by saying white people who feel hopeless, angry, and desperate to help they don’t know what to do to end systematic white supremacy. However, she does know that when the conversation of race is brought up, and white people become angry and defensive conversations stop, and so does understanding. Therefore, nothing is resolved, feelings are suppressed, and tensions continue to build. In order to help and not be a fragile white person, you have to be okay and get used to being uncomfortable.

I don't expect everyone to think, or feel, or act the way I do. I do expect people (those who want real social change) to dig deep down inside themselves and ask, "How much am I willing to sacrifice for justice? And, what does that truly look like for me?" As a person of color I am not your guide through this adventure of white fragility. However, I am willing to be your friend and ally through the process of finding your courage to overcome the shame, guilt, anger, and frustration that has paralyzed so many for so long from showing up (Judge 2017). Showing up for #BlackLivesMatter. Showing up for immigrants, refugees, and Muslims. Showing up for the LGBTQ+ community. Showing up for women and girls. Showing up for people with different abilities. Showing up for everyone who isn't like them. Basically, just showing up when historically marginalized people need you to show up.

I'm not going to tell you how to show up. I'm not going to give five easy steps on showing up. Because finding the courage to overcome years and years of social programming is complex. It requires a commitment to do the work, to overcome your own personal limiting beliefs and fears. It requires white people to share their privilege equitably. It's not about losing or giving away your power, but to find a way to share and work together in order to create a pluralistic society, to begin dismantling a system that has privileged and empowered a certain group of people based on race for hundreds of years, and thousands of years for patriarchy.

I do not discount, ignore, or minimize white people tears. Because those feelings are real. But, for far too long I have set aside my own tears to comfort the white fragility of others. Now, it's your turn to wash your face and get back to work. Because we have a lot of work to do.

​Watts, Sarah (2016). White fragility is real: 4 questions white people should ask themselves during discussions about race. Retrieved from https://www.salon.com/2016/07/18/white_fragility_is_real_4_questions_white_people_should_ask_themselves_during_discussions_about_race/

Adler-Bell, Sam (2015). Why White People Freak Out When They’re Called Out About Race: White Fragility is a defensive response to real conversations about race. Retrieved from http://www.alternet.org/culture/why-white-people-freak-out-when-theyre-called-out-about-race

Morris, Ben (2016). The Myth of White Fragility and How Social Justice Warriors Fail to Understand Their Critics. Retrieved from https://hdp.press/the-myth-of-white-fragility-and-how-social-justice-warriors-fail-to-understand-their-critics-c8e9ad75825c#.uvfvw07ka
Posted by Any Human Heart at 12:25