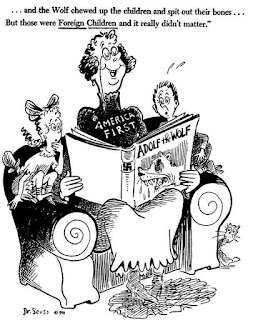 The phrase “America first” also has a darker recent history  was associated with opponents of the U.S. entering World War II.he America First Committee (AFC), which was founded in 1940, opposed any U.S. involvement in World War II, and was harshly critical of the Roosevelt administration, which it accused of pressing the U.S. toward war. At its peak, it had 800,000 members across the country, included socialists, conservatives, and some of the most prominent Americans from some of the most prominent families. There was future President Ford; Sargent Shriver, who’d go on to lead the Peace Corps; and Potter Stewart, the future U.S. Supreme Court justice. It was funded by the families who owned Sears-Roebuck and the Chicago Tribune, but also counted among its ranks prominent anti-Semites of the day It had to remove from its executive committee not only the notoriously anti-Semitic Henry Ford but also Avery Brundage, the former chairman of the U.S. Olympic Committee who had prevented two Jewish runners from the American track team in Berlin in 1936 from running in the finals of the 4x100 relay,” Susan Dunn, the historian, wrote on CNN last April.But charges of anti-Semitism persisted, and were compounded with perhaps one of the most infamous speeches given by one of AFC’s most famous spokesmen, Charles Lindbergh. In a speech in Des Moines, Iowa, on September 11, 1941, Lindbergh expressed sympathy for the persecution Jews faced in Germany, but suggested Jews were advocating the U.S. to enter a war that was not in the national interest.“Instead of agitating for war, the Jewish groups in this country should be opposing it in every possible way for they will be among the first to feel its consequences,” Lindbergh said. “Tolerance is a virtue that depends upon peace and strength. History shows that it cannot survive war and devastations. A few far-sighted Jewish people realize this and stand opposed to intervention. But the majority still do not. Their greatest danger to this country lies in their large ownership and influence in our motion pictures, our press, our radio and our government.”He insisted he was not “attacking either the Jewish or the British people,” but “I am saying that the leaders of both the British and the Jewish races, for reasons which are as understandable from their viewpoint as they are inadvisable from ours, for reasons which are not American, wish to involve us in the war.”

The speech was labeled as anti-Semitic. Dorothy Thompson, a columnist for the New York Herald Tribune, who had reported from Europe, wrote: “I am absolutely certain that Lindbergh is pro-Nazi. I am absolutely certain that Lindbergh foresees a new party along Nazi lines.” Those sentiments were echoed widely.Three months after Lindbergh’s speech, on December 7, the Japanese attacked Pearl Harbor, prompting the U.S. to enter World War II. Three days later, the AFC disbanded.But echoes of “America first” have persisted in the years and decades since. Most recently it was employed by Pat Buchanan, who used it as the slogan for his presidential run in 2000 on a Reform Party ticket. Buchanan, who has labeled World War II an “unnecessary war,” had also campaigned against free trade. Indeed, Trump, who sought the Reform Party nomination at the time, called Buchanan “a Hitler lover.”NPR’s Ron Elving argues that “assuming he is aware of at least some of that history, Trump is demonstrating his confidence that his adoption of a phrase can supersede its past.” The president may say he wants “America first” to mean “we will not be ripped off anymore,” but shaking off the phrase’s ugly past, especially after an inauguration speech that offered little outreach to the millions of Americans who fear what his presidency may bring, could prove difficult.
Posted by Any Human Heart at 12:48