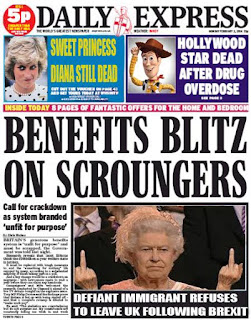 .I am getting really concerned about a family of benefit scroungers who have been aggressively begging from the UK population for the last 200 years. They have vast properties that lie empty in London, Windsor and London. Head of this family is a 90 year old billionaire called Saxe-Coberg-Gotha. Her husband a Greek migrant of 95 and her numerous descendents have aggressively begged through their entire life. They use I institutions like the Daily Mail and the Sun to fool people to give money to them by using manipulative techniques such as patriotism and supporting foreign wars. These aggressive beggars have kept vast numbers living on the streets in places like Windsor. It is well known that were the spaces in these palaces available that rough sleeping would be eliminated.

This family of aggressive beggars have allowed their friends in a shadowy organisation to promote the idea that homelessness is the fault of the individual and not society. The Saxe-Coberg-Gotha originally came over here and forced the previous family from the throne. This was perhaps their most aggressive act and evidence suggests that their ancestor Victoria was the grandmother of other aggressive begging families that dominated Europe in the 19th century. Historians have suggested that such families have dominated Europe for well over 1500 years. Their ancestors were effectively migrant warriors on horseback swarming across the frontiers and taking over countries.. UKIP policy makers consider this plot as part of a vast EU plot dating back to 1500 years before the setting up of the EU. A Mr D Nickle from Neath has worked out the plot and suspects that Marxist types were the originators of the plan.

The Saxe Coberg Gotha"s have always refused to acknowledge or allow adequate assessment of their wealth to be published. And it is clear that this famy does not pay the bedroom tax in spite of is no g hundreds of empty bedrooms. A supporter of the shadowy organisation, Sam Collins,that supports this family sometime known as highway men or Tories commented " Good luck to them.. they are obviously very intelligent and people are just jealous of them" Local residents and socialists are seeking to have the Saxe Cobergs Gotha's evicted and homeless people housed there. They are keen to get their houses back and are concerned that this same family are seeking to have their family cost of arms placed on blue immigration vouchers around the country. It's certain it is time we got our country and hug houses back and kicked out the scroungers coming over here and taking over our palaces and monarchy....odd that Mr Farage is so quiet .rumour has it he was expecting a title from this ageing aggressive family of beggars...i mean after all "Farage" sounds like a European name...
Posted by Any Human Heart at 15:18