Thoughts on the McEvoy allegations in the Western Mail...or from Mosley to McEvoy 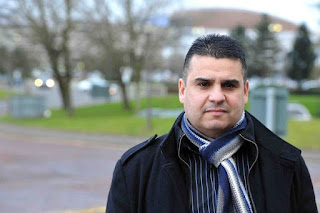 Thoughts on the McEvoy allegations in the Western Mail... I read tbe Western Mail on the Neil McEvoy complaints. I ask myself some simple questions...why would 20.000 people sign a petition about him.? I ask myself why after 10,000 years of patriarchy would a man be laying predominantly into strong women who work in tbe third sector.? Why would a man whi alleges virtual child abuse by charities have anything to offer? Why would a member of your staff claim to have health issues because of working with you ? Why would an entire Assembly group of politicians permantly exckude you from membership? Why would your defender's lay into 'wimmin and lefties' if tbey did not fear them.? Why WOULD Sovereign Cymru SUPPORT the losthsome Gareth Bennet on his attitudes to trans rights? Why would tbey rave about the words of Darren Noccols laying into powerful women like Oprah Winfrey using words like cackling if they did not feel threatened and wanted to call them witches? Why is the growing right within Wales not reach out to him if they did not sense a fellow being who feared women? Why would they do this if there was not at best a faint trace of the bully or the misogynist in him? .

Why would Plaid members send me messages saying that people were afraid to come forward because of his attack dogs on social media ? These questions do not go away and while I have experienced criticism upon social media and challenge it has never reached these proportions. There are too many questions and too many bitter old men defending you Neil McEvoy to make me dismuss these questions. Jac o tbe north fetes you; Sovereign Cymru celebrates you as a resistor to cultural marxism. These things do not happen by accident and i thought better of you Neil McEvoy...I am no saint i have no excuses for my past and i have been accused of being a bully like you...however there has never been a petition of 20, 000 nsmes and so much evidence that I see now about such claims. I wish it was different Mr McEvoy? I really do..those whom the broflakes support are not pleasing to my eyes... oh yes and one final question.Jac o tbe north has been running a hysterical campaign against the Lammas Eco Village and against third sector charities. Neil has been very critical of domestic abuse charities and Sovereign Cymru have been applauding attacks on the #Metoo campaign. Seems a link there.. any comments? Who links all of these attacks and who would have access to information. You might think that but I could not possibly comment or kno


From Mosley to McEvoy..a long historical trajectory of populism..Its getting lighter at the Penrhos busst stop yet theJanuary storm clouds are growing within and over Wales. Neil McEvoy is allegedly preparing to go down tbe long rightwing historical path that has been trod by polutical egotists from Mosley onwards. It begins with a psychological state when the political warrior sees himself {yes i mean himself) as more important than the political traditions they belong to gradually they have insights that are superior to tbe tradition. Then then they say the tradituon has lost its way and they provide a charter of salvatiion with themselves as messiah. In Neils case it was the right to buy that was wrong. Then Plaid he alleged was In a bubble isolated in Cardiff Bay. He knew all the answers. Then others surfaced and his political tradituon cast him out .

Then enter from the right a bitter old man of the north. This old man wants a populist right wing nationalist party and gradually begins thst young Neil ĺike Luke Skywalker was offered by the Emperor the path to the right side. Over night as his expulsion is announced. His attack dog the loathsome Anne Greagsby rains down insults upon her niece by twitter, blaming her for the expulsion of the messiah. Its an old path tread by many that goes back to Mosley . The test of McEvoy will be now if he understands tbe temptations of this path. Will he join Jacs new monster of the right and take the path of Farage and Mosley . The wall is breached and the right walkers are heading south for the Rhondda and for Neath. The undead attack grannies of Penarth are their vanguard..the question is will Neil McEvoy and Anne Greagsby end their political days in a party of right wing fruitcakes basted in political conspiracy theories. The January storms are coming to Wales as Plaid finally decides if it is a socialist or not. Be warned Neil and read the life of Mosley...and get the self appointed attack dog trained. Wales does not need a Messiah or a Mosley. Jac needs both and he hopes for you Neil...work it out.

Political narcissism is a deadly brew . I have been the political agent of a young man during an election who was suffering from the same contagion. You are older Neil you should know better...