Angry White People by Hsiao-Hung Pai A fascinating book for these dark times.......... 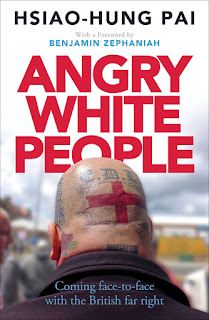 A rising scourge to England’s social peace and multiculturalism, the English Defence League (EDL) has violently protested against Islam since its inception. In the fantastically daring Angry White People, Hsiao-Hung Pai follows a group of individuals who got caught up in the wave of far-right street movements that began in 2009. Pai investigated the rise of the EDL and other extremist organizations, falling in with several of their members and observing their day-to-day lives.
Delving deep into five lives in this marginalized section of England’s white working class through research and interviews, Pai uncovers something surprising—their xenophobic ideologies are not an aberration in modern English society, but rather an ever-present facet that is continually reproduced, rejuvenated, and mainstreamed by the media and political powers

If only Hsiao-Hung Pai was on hand every time former English Defence League, now Pegida UK leader, "Tommy Robinson" appeared on the TV. We would forever be spared the sight of mesmerised, hopeless interviewers giving him a free pass to pose unchallenged as brave defender of the white working-class against those nasty sharia-loving Muslims.

A third of a way through Pai's powerful book, Angry White People: Coming face-to-face with the British Far Right, she manages, via his PA, to meet the pseudonymous Robinson in a hotel in his home town of Luton. Unlike most journalists, Pai is not looking for cheap thrills, or the sordid anticipation of being rewarded with quotable copy from Robinson.

Pai rapidly tires of Robinson's usual patter, and aware that he is of Irish Catholic background, shoots him a question: "What is English?" He is unable to answer. She helps him out: "What are you defending?" He proceeds, with a little help from Pai, to tie himself in knots, ending with a desperate rant about how the local council had cancelled Christmas to assuage Muslims: "Everything we hold dear is disappearing. Everything that is sacred to our culture, our way of life, is eroded. And all we see flourishing is Islam." At this point Pai could have gone down the well-trod path of putting on a show of reluctant agreement and telling us that "he speaks for many". Instead she tells the reader he is talking nonsense: "The erosion of 'English culture', the dominant culture in this country, is plainly a false fear. Looking at his town with its white British majority, you do not get the impression that is being 'taken over by incoming cultures'."


Pai's impression from her first encounter with Robinson, apart from his isolated upbringing and self-segregating petty bourgeois existence, is that his racial politics are unremarkable in that they cleave more to "the old-fashioned 'centre right' racists of British mainstream politics than to the traditional far right such as the BNP". "Pai adds: "His views resonate with, for instance, those expressed by tabloids such as the Daily Mail." It's a peculiar position for a self-styled working-class "outsider" and "underdog" to be in – ideologically in tune with the Old Establishment he says has betrayed "his people".

On a later occasion, Pai decides to provoke a reaction from Robinson about his self-image. She asks him how he feels about being called racist. His responds by denying he is racist – "I've not said one racist thing in my life." He backs up his denial with his version of an argument widely deployed by mainstream political commentators on both the right and the left – that Muslims are not a racial group, thus unbridled hatred towards them and their religious beliefs is not only acceptable but a "freedom" to be exercised to the max. So what about those facebook comments from EDL supporters describing Muslims as goatfuckers? Robinson shrugs it off. "Yeah? That's not racist though." But as Pai writes in Angry White Men, the simple truth that "the street movement isn't only against what it calls 'Islamic extremism', but against Islam as a religion and Muslims as a people. It works to racialise Islam and its believers as a homogenous group of people, in direct contradiction of the leadership's claim that isn't a racist movement or a movement that has been promoting racial hatred." This will not be lost on those who have experienced at close quarters an EDL demonstration, with the Nazi salutes and murderous hatred. pressed on whether he condemned EDL supporters making Nazi salutes, he reportedly said: "Well, I think if I was standing next to them there would be a violent act. If you... look into our history I was actually arrested for assaulting someone doing that at our demonstrations. I wouldn't tolerate that."

Pai traces the rise and fall of the EDL through interviews with its original Luton leadership and local foot soldiers. She finds that "white people" are angry for lots of different reasons, many of which are easily understood – poverty, joblessness, a threadbare social fabric, a distant political class that sneers at them when it isn't punishing them. She also finds that there are contradictory views, often held by the individuals she talks to, as to who is to blame and what to do about it.
Rather uniquely in literature examining the far right, Pai also takes time to talk with those involved in leading opposition to the EDL and its offshoots, particularly those active around Unite Against Fascism.

She discovers that historically deprived areas such as Tower Hamlets have a continuous and unifying working-class anti-racist and anti-fascist tradition going back generations. In doing so, she implicitly challenges the widely peddled notion of an ethnically and culturally distinct "white working class" driven by an inherently conservative outlook and fear of multiculturalism into the arms of the far right.

She lays out a wider context to the rapid rise of the EDL, namely the political ground cleared for it by those in government prosecuting the "war on terror" and it domestic expression – the casting of Britain's Muslims as a suspect community, and their religion as uniquely prone to terroristic interpretations and incompatible with Western values.Powerful sections of the media have acted as enthusiastic cheerleaders in this project, seemingly without thought to the dangerous forces that they have unleashed.

Pai gains real insights into the nature of the EDL and its activist base. She does this by building a series of ongoing conversations with those who are prepared to talk to her. In her previous investigations into those who exploit and profit from migrant labour, she has had to go deep undercover. But in the case of the EDL, the eagerness of some to "prove" post Stephen Lawrence that they are not racist, combined with Pai's basic empathy with those who feel marginalised by the political elite (not the same as sympathising with their beliefs), prompts some to open up.In 2013, Robinson quit the EDL. It should have meant an end to his thuggish political career. His organisation had stalled after suffering a series of high-profile defeats by anti-racists in places like Tower Hamlets, precipitating a takeover bid by neo-Nazi groups inside the EDL that formed the violent backbone of the street movement.

However, in a bizarre turn of events, Robinson was thrown a lifeline by Quilliam, whose Chairman is a former radical Islamist who has somehow turned his past involvement in Hizb ut-Tahrir – an organisation the vast majority of British Muslims wouldn't touch with a bargepole – into a saleable commodity. As Ziauddin Sardar commented at the time of Quilliam's launch in 2008: "I am troubled by the fact that former extremists are seen as the only people who know how to deal with extremism. Just because you have been an inmate of a mental hospital does not mean you are an expert in clinical psychology."

Given that Quilliam is nothing if not a sharp operator, one can assume that its theatrically staged announcement that it had helped Robinson exit the EDL and was now working with him to fight "extremists"' was of mutual benefit.A "reformed" Robinson has recently emerged in the leadership of Pegida UK, a copy of the German "anti-Islamisation of Europe" organisation. According to Pai, Pegida UK is a loose aggregate of ultra-nationalists, Loyalists and white supremacists.
Angry White People is an enlightening, thoughtful and intelligent study in what makes the far right tick, their political strategy and aims, and how they build support for them.
Much better the enemy you know. As Benjamin Zephaniah writes in his polemical forward to the book: "This is personal
Posted by Any Human Heart at 12:52