“Genuine racists not welcome”..the leitmotiv of the Blue kippers..lyrical words in the first week of the year of the Earth Dog.... 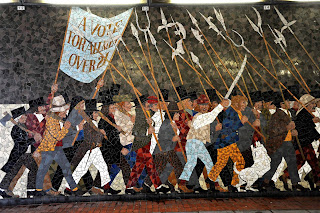 Slips of the political tongue...I read on the UKIP's events page for their pro Brexit demonstration at the National Assembly in Wales ..that "genuine racists are not welcome"..I guess fake racists are or indeed those using racism, fear and division for political ends . Freud commented how slips of the tongue often reveal our hidden inner state. I can't really think of a more telling slip of a political Id than this. I have to laugh but with that laughter comes the realisation of exactly what the whole Brexit process is about for the right. An opportunist, a parasitical use of racism clearly means that you would be welcome there. It's fascinating how these slips reveal true nature and outlook. The whole UKIP project summed up...getting our country back...how sad ; how disturbing...a discourse of fear and loathing.. in that one phrase a soul or shadow laid bare. ..an agenda revealed , a Goebbels like great lie..behold the Party. Behold the plague launched by Nigel the Plague bringer..who is as cold as a Lizard and as ambitious as Lucifer..bringing fear to your area and your psyche

In the year 2017 the plague touched us all. It was not confined to the Oran of Albert Camus. The bacillus turned up again in the blood of the shark skinned populists of the right, who in running for power infected Brexit Isle as it shivered and shrivled behind the borders it thought it had claimed back. The plague spread far and wide and as it flowed through the water supply of the right it became cancerous and transformed the sensibilities and sensitivity of the those who once claimed a conscience.

The trope of “value for money” described all accounting and all assessment. Education was to be about conditioning and controling. The Libertarian s of the right saw their own narcissism as a measure of all that was good. Trump like they could not distinguish their own egos from common sense. They had no analysis of power, no comparative abilities, they knew no history and fixed common sense as a statistical average of the prejudices of their own blind spots and of the Daily mail and of the Sun. equivalence became their watch word..they knew no past no future. All predictive sciences and arts were nocked. The books they read became thinner with less words and even even fewer letters.

They called them selves "laymen", non -specialists and celebrated the ignorance and lack of reading. They fantasised a past that had never been, dreamnt of a perceived past where binary observations were all there had ever been. Some even forgot those of their own sexualities that had struggled for equality and respect. And as the cult of the individual grew and become more ingrained within the empty reaches of their minds and souls something deep within died, withered and went out.
Poor Helema prattle, poor Higgy. Nether was sure of the their own clarity of thought. Tools of thinking belonged to neither or were so blunted that they has ceased all practical use or application. Though perhaps the word tool richly applied to young Higgy the red kneck of Tonna or was it paerhaops the Tonna Blcackshirts.

This was a bland time and a blank time. It was a time of conciet and conservatism. It was a time of the narcissist and the racist, the ignoramt and the ignoramus. It was a time of simplicity and of one dimension. Yetthe plague spread. In the age of the limpet the layman was king.
This was the land of the desert, it was Egypt after the burning of the Library and the land of the Fireman of Fahrenheit 451. This was Orwell's New Speak, the land of those who fear to think critically and assume that analysis was indoctrination. Like the Psychotic they built the castles in the air and moved in to the right hand side of the building. They had nothing to compare it to, they had no point of reference, no map coordinates and no ability to think outside the narcissism of self. They even failed to see the narcissism of small difference that existed behind their “individualism” that was identical to the rest of the alt right with their cigarettes, their Anders Brevik Pony tails and their pretend Oxford Scarves.

In Neath the Milo Yiannopoulos of Aberdulais Falls and the H P Lovecraft of Seven Sisters failed to realise that they were just like all the rest of the tribes of the alt right. Their thought made the analysis of Milo Yiannopoulos's bookappear almost Plato like in quality. Yes they insisted that were all individuals but as the plague moved they failed to understand that they had not gained their country back, that their positivity was built on bricks without straw and substance. Their thoughts half baked and at the pretence of Libertarianism as they failed to understand that the term was an adjective and not a noun. With no knowledge of history, social science or culture they failed to realise that politics was more than a two dimensional axis. They never bothered to read. Some wondered if they could read and as the narcissism spilled out first destroying UkIP and then moving on with its blue bacillus deep into the body of the Tory party.

But as the patient groups of the poor and dispossessed woke up and saw the ageing city slackers of the land and the fifth rate thinkers of the blue-kippers and alt right. The return of two party politics in the mid of 2017 and the re-emergence of true Socialism spread through social media. Two paradigms emerged and the right began to fall back. In Holland, in France and in the UK there appeared other lens..that sadly knew them not. As Brexit bit and the scales fell from the eyes of many. A new Left paradigm began to grow. It changed the Labour Party and destroyed the Blairite tendency that had staged entryism and take over of the party.

Yet still there are many who fail to realise that we are all a world of immigrants and insist on being in a world of ignorants. There is still far to go..... but welcome to a new world and the year of 2018. A time of change is the most dangerous yet it is out of crisis that a new approach begins. The new paradigm unfurls and the right falls apart....behold the future....where there is fear there is as well power. This is Whi Chi the time of chance and change as the Moon grows full......as we cast the coins of the political I Ching.....these are my words in the first few days days of the new year.
Nietzche “A political opportunist divides us into two classes: tools and enemies.”
Posted by Any Human Heart at 13:57