Go now Nigel it's over..Flying the Union. Jack UPSIDE DOWN 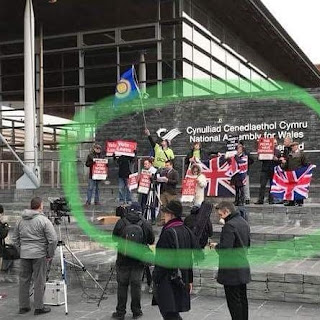 Go now Nigel it's over..Flying the Union. Jack UPSIDE DOWN .On a wet Monday morning a simple relief can be a solid bus stop at Penrhos. Deep in January a little more light begins a little earlier. As I glance around the growing year I notice nervousness both on the right and amongst the Farageists an uneasy grows,he knows that the hapless heirs to his legacy could not arrange a right wing rally in Nazi Nuremberg. He knows the paradigm is shifting. Only 12 hapless and pathetic non genuine racists could turn up at a rally for Brexit on Saturday in Cardiff. Social media is full of excuses . Many claim it is all over so it does not matter ...reminding me of the hapless remain campaign of 2016. The tide has turned and the consequences are clear...people are waking up. The right wing agenda is clear.. a hard Brexit will wreck our public services.


The effects are already being felt in the NHS. The corporations want cheap labour and a docile workforce. The most vulnerable wake up and the pathetic Henry Bolton gives up his girlfriend for the corpse of UKIP. Yes Nigel the tide turns and a Corbyn government in waiting play's the long game on Brexit. We all know what is coming a Norwegian style arrangements with the EU and we will be back in fully within 30 years. A little light in January Nigel a dawn is coming that will wipe out your legions of the undead right and it began deep in January. You can check out any time you like but you can never leave...quickly Nigel fade like Blair before it's too late. What will be your legacy? A few PhDs on comparison with the Poujadists of the 50s and an A level question and the ponderings of fading bloggers.. quickly Nigel the dawn is breaking go now....i mean in Cardiff at your pro Brexit Rally you flew the Union Jack upside down ..a pun, a metaphor or a metonoymy for your legacy...go now..when a Royal Naval vessel flies the flag upside down.. it means shop in distress..did you know that Nigel?
Posted by Any Human Heart at 13:27