Bigots Broflakes and Misogynists of the north...you have nothing to lose but your fear of women and transgender people and..........

bogot
Shorthand for "bigoted bogan". The bogot is typically a racist, xenophobic creature, unable to assimilate rational information or process logical thought. It thrives on tabloid scaremongering and information from racist groups on social media platforms.broflake 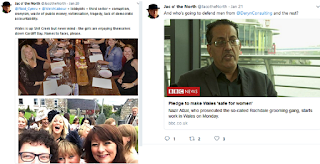 Yesterday I commented on this man's attitude to strong women. And then you find this on his blog. It makes me cringe with embarrass to be male when we hear of things like this. ...Jac and his mates are clearly becoming creeps of the week. Yuk

The right wing blogger Jac o' the North doesnt seem to like women very much at all. Nazir Afzal's pledge to 'make Wales safe for women' should be welcomed by everyone - not used as an opportunity to indulge in bar room misogyny. And asking for the 'names' of these women is downright sinister 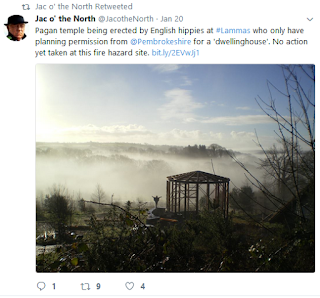