Fascism comes to the USA and here

I sometimes fear...Fascism comes to the USA and here

Between the Full Moon of Thursday and the blood moon of Friday July 27 Trump will come here here on Friday July 13. As the heat builds as the Todler in chief with a thin skin and a large ego crawls towards us.

How apt that between the moons he should come here. There is Los on his hands it flows from the surrogate holding of the guns of the NRA. Trump hands runs deep in blood. He has fed the alt right; fed their prejudices. The Confederate ghosts possess his staff. They are a stain upon decency . They feed the monsters. The rise of trans and gay bashing and killing walks in his shoes. All over the UK we prepare for this creature Trump..we are all waiting for him and he will never forget his visit..it will be a wake up call for him and his outlook ...b

On Midsummer Eve they are coming for the Roma in Italy In America we hear of a Downs Syndrome child seperated from his parents. In Hungary and Poland unfrozen from aspic, fascism is placed in the microwave of the populist right and reheated. The old prejudices, the old racism is back. This echoes the race laws of Mussolini and of the fascism of the 30s. These claims echoes the nationalism of the interwar years and worse.. The calls for a register of ethnic origins echoes those of the blackshirts. Here the "Sun" raves on Brexit as children locked in cages become invisible . Two years on the closing of minds here and throughout the world shaming us all. 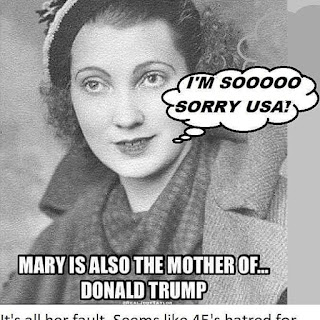 The Americans looking back deify their founding fathers without knowing anything about them. These wealthy men white plutocratic and the owner of slaves were an odd few. One stands out one Thomas Mifflin President of Congress whio almost echoes Trump in outlook and actions. Trump is the product of this constitution and the constitution his midwife . George Washington feared for the future of the Republic he knew the weakness of the ancient Republics and of the rise of those like the demagogues of the Athenian state. Washington and the founding father's did not create a constitution for all times and situations. Yet so many fail to understand it's real significance or place. AS fascism cones to the USA the fears of Washington from 200 years ago blooms into a rank plant of corporate fascism.. you were right in your pessimism George Washington....what began in expressing the values of the enlightenment ends with Trump"s America crashing out of the UN convention of human rights. This is how the world ends not with a bang but with a whimpering fascist egotist.. George Washington weeps with shame as the children weep in cages and as a whole new meaning clings to American Exceptionalism.... 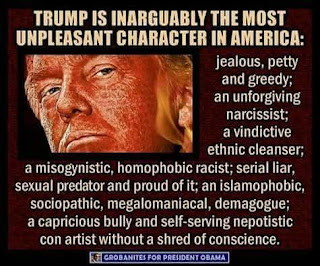 If you tolerate this your children will be next...If you tolerate the cages on the Mexican border...your children will be next. And so Trump it has come to this ...The sound of crying children pulled apart from their parents and placed in cages like animals in the zoo..have we seen anything like this since the Third Reich? Throughout America the Conservative Christians and the alt right rave with Ayn Rand orgasmic fascist delight.. yes it's come to this and wasn't it a long way down?
Even your trophy wife Trump calls out for America to have a heart. What will come next I do wonder?. Harry Turtldove wrote a series of novels about the rise to power of a Fascist President called Jake Featherstone and now we find that his name is Donald Trump.

Trump is coming here. He wants to sell us his chlorinated chickens. He wants to have American Pharmerceuticals to have access to our NHS. Will little Theresa let him in? She needs his money to pretend that there really was a Brexit bonanza....good old uncle Donald the special uncle who has a special relationship with little Theresa.. she doesn't have to tell anyone.When she has sold her soul to the DUP..then selling our NHS to Donald is a minor issue..as long as she can keep this vile government in power..then what does it matter.?

The abuse goes on and on. Umberto Eco warned of Ur Fascism and it's born in the USA. It's coming here next as the "special" relationship deepens and we are all sucked into it's vile orifices. The alt right here and there turn away from any humanity and reveal the sickness of their souls
The Conservative Christians baying at the Mexicans and locking their children in cages become a new inquisition, new conquistadors of the alt right as they lose all connection with anything Christian or Christ like..

They make Donald into a monstrous beast slouching towards Bethlehem...a vile world is waiting to be born..Donald is coming here in July...let's prepare and take to the streets and give him a welcome. Because if you tolerate thus your children will be next..And your NHS..so as you wait my fine Brexiteers chanting for Trump you have your wish...He is coming here.. let's make 68 look mild..it's time to say no paseran Trump...it's gone on long enough. It must be disrupted...
In Italy the government turn on the Roma. In Poland the Law and Justice party transform into a Fascist like party. The Fides party makes it a criminal offence to feed or take take in refugees. It's growing dark as the shadow of Steve Gannon Brooks like a vulture across the European continent...it grows dark as each one of us is made to choose which side we are on. When they knock at your front door.. how are you going to come? There is no middle ground and we must ask in the end who do you trust and who in the final analysis would sell you to and report you to the secret police. I would ask those who call them centre right would they do tbst to me. I guess many would. Oh well come dungeons dark or gallows Grimm will not go into the dark...it's now either barbarism or socialism.. got it ? and there is no middle ground..there never was...
Posted by Any Human Heart at 12:22