Prophecy I wonder? Now is your time to go to Hell 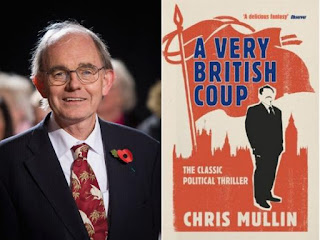 “For weeks all opinion polls and all responsible commentators had been predicting that there was no hope of the Labour Party being elected on a programme like this. Ever since Harry Perkins had been chosen to lead Labour at a tumultuous party conference two years earlier, the popular press had been saying that this proved what they had always argued – namely that the Labour Party was in the grip of a Marxist conspiracy. Privately the rulers of the great corporations had been gleeful, for they had convinced themselves that the British people were basically moderate and that, however rough the going got, they would never elect a Labour government headed by the likes of Harry Perkins.” 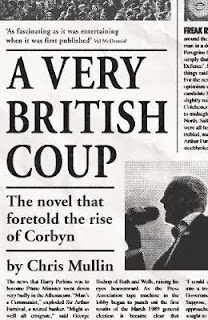 From Wikipedia, the free encyclopedia
A Very British Coup is a 1982 novel by British politician Chris Mullin. The novel has twice been adapted for television. The first version, also titled A Very British Coup in 1988 and 2012, the Secret State, was "inspired" by the same novel.[1][2]

Harry Perkins, is the left-wing Leader of the Labour Party and Member of Parliament for Sheffield Central. Beating all the odds, Harry becomes Prime Minister and he sets out to dismantle media monopolies, withdrawal from NATO, unilateral nuclear disarmament, and create an open government. Many people in the media, in financial services, and in the intelligence services, are deeply unhappy with Harry's win and his policies, and they unite to stop him by any means.

The book was written in 1981, at a time when Tony Benn looked likely to become deputy leader of the Labour Party which at the time was strongly challenging the government of Margaret Thatcher in the opinion polls. It also has strong echoes of the persistent rumours that have circulated over the years about attempts by members of the British security services, and other wings of the British Establishment, to undermine and depose Harold Wilson's Labour government of the mid-1970s.[3] This first became widespread public knowledge around 1986 with the controversy over Spycatcher, after the publication of the novel but before the broadcast of the TV version. The story also has echoes of the 1975 Australian constitutional crisis in which there was alleged CIA involvement to remove a government proposing to close US military bases on Australian soil.

The novel was published by Serpent's Tail, and was re-released in 2010, with a new sub-title "A Very British Coup: The Novel that Foretold the Rise of Corbyn".

The novel has twice been adapted for television.