Of Speakers past and present the servileopath and the flawed. 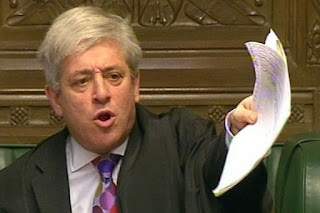 Of Speakers past and present the servileopath and the flawed.. .I listen to a report on allegations made at John Bercow on Radio 4....that he is bullying Mps and is sexist in outlook. I can't really comment I have never met him. However I can comment and notice how many of the bluekippers of the right feel aggrieved by him. Yes it was wrong to call Andrea Leadsome a stupid woman. However her knowledge of history does reveal her stupidity and lack solid reading and information..a d it was wrong to use her gender. Yes perhaps a more apt term would be a stupid Tory.. I wonder how many men of the right howling now at him took part in vicious sexist and racist attacks on Diane Abbot. Of course it's nothing to do with the fact that he is a remainer and has undertaken a systematic review of parliamentary procedure..
.
I have read Martin Shipton' s excellent unmasking of a former Speaker one George Thomas. Thomas was a bigot of the first order his outlook and attitudes were a clear echo of the kippers of today.He was a sycophant and a servileopath.He grovelled to Thatcher; betrayed the people of Aberdan and was a hater of all things Welsh. He was a monarchist a sycophant a man who preferred Julian Hodge to the ordinary people of Wales and feared Socialism. He was a conservative psychologically on the side of tradition . Yep we know what sort of Speaker the Tory right desire ..perhaps they could channel George Thomas from where ever he is now...yep they want a servile speaker who bows down to their magnificence and who knows their social superiority and prejudices.. Yep George is their man.they don't want a man with flaws..they want a George Thomas like sycophant ..thats what it's really about.. and of course Bercow is a former Tory who has betrayed his origins...and they hate him for it.. perhaps Nigel Evans that former Deputy Speaker could be brought back to be the bluekippers new Georgie boy.. 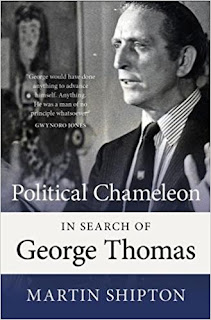 George Thomas, the former Labour Cabinet Minister and Speaker of the House of Commons, was the sycophant supreme of the British political system and arguably the most divisive figure in twentieth-century Welsh politics, whose transformation from a radical young socialist to Viscount Tonypandy, a fervent supporter of Margaret Thatcher and servile courtier to the English Royal Family who was perfectly described by poet Nigel Jenkins as 'The Lord of Lickspit'. Drawing on previously unpublished material from Thomas' vast personal and political archive in the National Library of Wales, and interviews with many who knew him during his career, award-winning journalist Martin Shipton reveals the real George Thomas, the complex character behind the carefully crafted facade of the devout Christian and ultra British-loyalist, and discovers a number of surprising and shocking personae - which have previously been unknown, downplayed or overlooked - of this ultimate Political Chameleon whose political legacy now lies in ruins: The devious draft-dodger during World War Two. The Communist sympathiser controlled by the Soviet Union. The secret Freemason. The self-proclaimed teetotaller who enjoyed alcohol in private. The close acquaintance of a controversial financier. The spiritual sidekick of a Saudi Arabian oil minister. The duplicitous informer for Harold Wilson. The shameless betrayer of the people of Aberfan. The die-hard opponent of devolution with a spiteful antipathy towards the Welsh language. The unscrupulous fixer of Honours and master of patronage. The 'confirmed bachelor' and Methodist lay-preacher who sought the company of 'rent boys'. Martin Shipton also investigates fresh evidence relating to the explosive allegation that Thomas was a child rapist and a predatory sexual abuser of young males. This is the book that his dwindling number of supporters feared and the book his political opponents have been waiting for. Political Chameleon dissects George Thomas chapter by chapter, exposing him as a sanctimonious hypocrite whose religious veneer was a sham.
Posted by Any Human Heart at 13:11