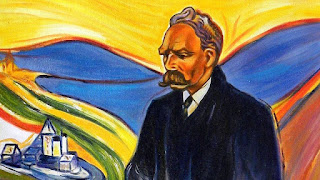 I don’t think Nietzsche had any direct influence on the left at all - for the most part he is still considered a pariah in left-wing circles. Which really is a shame because Nietzsche has provided some of the sharpest and most prescient thoughts, analyses and predictions concerning communism, socialism and social market economy. However, they were not to the left’s liking so he was scorned. Had the left been less oversensitive they would have found Nietzsche a great source of inspiration in countless domains - for he was a fierce criticist of the cultural and psychological impacts of capitalism, loathed the idea of markets as a model for society, delivered great insightful analyses on the anti-emancipatory power structures beyond state and religion, and was infamous for his attacks on nationalism and ingroup-outgroup-chauvinism of all kinds, advocating internationalism and a peculiar kind of meritocracy beyond race, nationality or status.

Nietzsche’s indirect influence on the left, however, has been significant: from Fromm to Sartre, from Camus to Derrida, from Luhmann to Adorno - most of the Left’s poster childs have been deeply incluenced by Nietzsche - some even bordering on the imitative. Constructivism, decontructivism, existentialism, schema theory, the transcendence of nationalism and (classical) chauvinisms in favor of a quest for what constitutes a “human culture”, the emphasis on self-actualization and creativity… all of this has been kicked off by good old Fritz. However, the Left would next to never acknowledge this, preferring to cling to much more dogmatic thinkers channeling Nietzsche, as Nietzsche himself also proudly displayed his contempt for the state, his strong libertarianism, strong elitism (in both a meritocratic and a genetic sense) and derision for party platforms in general… unacceptable views for the left.

It is funny though that the right has (had) far less issues with Nietzsche… for it is not too far-fetched to argue that with his strong anti-religion, anti-nation, anti-capitalism, anti-market, anti-chauvinist (in a classical sense… by today’s standards he would surely have been called a chauvinist, but he was very outspoken against anti-semitism, had a very differentiated view of the whole male-female-thing, had no problems with gays, had a critical stance towards his time’s omnipresent racism etc.), anti-militarist (he embraced the idea of the soldier and thought wars were a good catalyst for cultural development sometimes, but clamored against the arms race and arm wrestling that would lead to WW1 and 2) views, he would have felt much uneasier among right-wingers than among left-wingers. (He actually wrote open letters to the leaders of nations calling for leading nationalists, militarists and anti-semites to be rounded up and executed).

Like his philosophy, Nietzsche as a political thinker was “beyond good and evil” and most certainly beyond Left and Right.


How the Nazis Hijacked Nietzsche, and How It Can Happen to Anybody

Nietzsche, by Munch
If there was one philosopher the fascists of the mid-20th century loved, it was Nietzsche. He was so adored by them that Hitler gifted Mussolini the complete works of Nietzsche for his birthday. The Nietzschean ideals of anti-egalitarianism, the Superman, and the will to power inspired them to act, and millions died because of it. They adored his ideas, and anointed him as the prophet of their ideology.

And most of it was due to misunderstandings and willful changes.
Nietzsche’s philosophy is purposefully difficult to read. His criticisms of the “Slave Morality” he credits the Jewish people with inventing can seem like an anti-Semitic rant from time to time. When in reality, he saw the Jews as a powerful people with a fine culture, his attacks are on their ideas: not on the people. His idea of the Superman was not a racial concept but rather a spiritual one.
He claimed that the Germans were great because of the “Polish blood in their veins”, and saw German nationalism as a dangerous joke. He ended relationships over his disapproval of anti-Semitism, including ones with his sister and the composer Richard Wagner. After he went mad, he wrote letters urging the great powers of Europe to attack Germany before it was too late.

Then, how did he become the Nazi Philosopher?

How Nietzsche was hijacked is a curious story, and a powerful warning. It begins with his sister, Elizabeth Förster-Nietzsche. She was reportedly an unintelligent woman; when she asked philosopher Rudolf Steiner to help her understand her brother’s philosophy he was forced to give up after several excruciating attempts to educate her. He sent so far as to write that she, “lacks any sense for fine, and even for crude, logical distinctions; her thinking is void of even the least logical consistency; and she lacks any sense of objectivity.” Her husband was a famed anti-Semite who Friedrich couldn't stand.
She took over her brother’s estate after his descent into madness. She was then able to selectively edit new versions of his works, and created the entire book The Will to Power with his unused notes, in a way as to emphasize the bits that fit in with her political ideology. She withheld his work Ecce Homo from publication for years as it had a great deal in it that would derail her attempts to frame him in her image. In conversation, she developed a remarkable ability to remember conversations with her brother that supported her ideology.
To put not too fine of a point on things, she even met Hitler in the early 1930s when he visited the Nietzsche museum she operated. Hitler attended her funeral in 1935.

Adolf Hitler at the Nietzsche museum.
How did Nietzsche get used by the Nazis?

Just as American politicians like to reference the ideas of dead American heroes like Washington and Jefferson, the Nazis sought great Germans to reference when justifying their new regime. Nietzsche, with the tweaks made to his philosophy by his sister, became the primary thinker for those Nazis looking to justify their beliefs with philosophy.
German universities taught Nietzsche as part of courses on the new order, references to soldiers being the Ubermensch were common, and the will to power was adopted by the Nazis as a key psychological insight. The philosopher Alfred Baeumler claimed Nietzsche had prophesied the rise of Hitler and fascism in Germany.
After the war, the warping of his ideas to suit the ideologies of his sister and later of the Nazis was corrected in large part due to the works of Jewish-American philosopher Walter Kaufmann. The notion that Nietzsche was a proto-fascist can be said to be long debunked.
So, Nietzsche was really a kind and nice philosopher who gave out candy to children?

To give the devils their due, Nietzsche did have incredibly reactionary views on women, viewing the ideal women as little more than a broodmare for potential Ubermenschen. This was a point where the fascists could just run with what they had. Similarly, Nietzsche did reject egalitarianism, democracy, and occasionally ventured into rhetoric that verged on “let’s eat the poor”. He was no saint, but he wasn’t a Nazi either. If reading Nietzsche doesn’t shock you, something went wrong.
Nietzsche’s philosophy is easy to misunderstand and almost as easy to purposefully misinterpret. Even today, the far right is still using bad readings of it to justify their politics. Nietzsche was anti-nationalistic, considered the Jews worthy opponents, despised Christianity, and mass movements of all kinds; it takes a bad reading to consider him a goose-stepping fascist instead of the champion of individual genius that he was.
So, what does this mean for us today?

Almost any philosophy can be hijacked liked this. It’s really not that hard. Examples come to mind without having to try. Every Marxist would claim that at least one of the communist regimes of the last century had twisted the philosophy in a way to promote selfish goals. Utilitarianism can be used to argue that every action imaginable is for the greater good. It might go without saying that the Bible has been used to justify pretty much everything; slavery, abolitionism, war, peace, and so on ad infinitum.
The real thing you should take away form this story is how easy it was to do it. Elizabeth Förster-Nietzsche was able to pull it off without understanding the ideas involved; all she had was the proper legal rights and some convenient events working for her. All of it happened despite Nietzsche’s friends objecting to it, and people who had lectured on his works before he went mad did nothing. It could happen to any school of thought, and that should terrify you. Always make sure you get the full story before you make any decisions, philosophically speaking.