Rather perish than hate and fear, and twice rather perish than make oneself hated and feared — this must some day become the highest maxim for every single commonwealth. Friedrich Nietzsche
Two friends of mine Julie Colbran and George Colbran were travelling back from Manchester on a train just recently. They fell into conversation with a man on the train, All was going well till the subject of the European Referendum came up. Julie and George are principled left wingers and are voting to remain, they support workers rights and environmental protections. When they said the man the man turned. His face sneering in hate he called them lefties and told them that they should fear an immigrant raping Julie's daughter and said that our country was being flooded and destroyed and that by voting leave the problem would be solved. The leave campaign has created a script of hate and intolerance, the vulnerable oppressed by the elite have been fooled and hypnotised into blaming the immigrant and those of other cultures.


I wonder what would have happened had the man on the train been sitting next to someone of another race or culture. The epigenetics of hate and are perverting and distorting ordinary people to fear, loathe and distrust those who seem different. The discourse of hate and distortion lay behind this perception, clever , as tve hard right wing individuals who know all about this celebrate. Beware if you are different, do not read the Daily Mail or the Sun, are open to toleration and celebration of different lifestyles, beliefs and identities 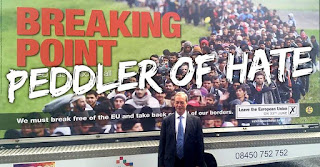 One of the biggest donors to the Leave campaign in 2016 was one Gladys Bramall from the West Midlands. She gave over £600,000 pound to LEAVE according to the Electoral Commission. A leaked list from 2008 reveals that she was a former BNP member. It is quite clear what the implications are. They have opened Pandora's box , unleashed the demon of hate and intolerance and offer us scarce hope for the future.

We stand on the brink of Brexit. Every progressive must be in no doubt what Brexit will mean. The signs and omens are ominous ..as Airbus warns us as we stand on the ledge and the ground beneat our feet begins to crumble...

We ought to fear a man who hates himself, for we are at risk of becoming victims of his anger and revenge. Let us then try to lure him into self-love.
Friedrich Nietzsche

While many of us can identify the process of projection in somebody else, few of us are able to see it in ourselves. Think about it — how many times have you stopped yourself and said, “I’m just projecting; this has nothing to do with John”?

Our own projections are difficult to spot, first of all, because we don’t want to identify them as such: the whole point of projecting is to rid ourselves of something unwanted. While there are instances where people project their good qualities into others, ridding oneself of painful or unpleasant experiences is much more common. I’ve discussed these issues in earlier posts about projection and the toilet function of friendship. Today I’d like to talk about how we can become more attuned to and aware of our own projections, even when we’d rather not. 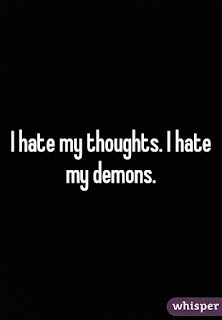 Projection is an unconscious fantasy that we are able to rid ourselves of some part of our psyche by splitting it off and putting it outside ourselves, usually into somebody else. While the initial process occurs outside of awareness, maintaining or insisting upon the reality of that projection often occupies our conscious thoughts. The process is usually distinguished by its focus and intensity. I can explain this more clearly with an example, one I alluded to in my first post on projection. Grouchiness is something most of us have experienced; I suspect my description will resonate for many of you and at the same time, give you the chance to study the process the next time you feel grouchy and see if my explanation makes sense.

So at the end of my work day, I may be feeling irritable because (I believe) members of my family are doing things I find annoying. In my thoughts, I may begin to zero in on those irritating behaviors — say, that person’s irksome habit of constantly complaining about his or her daily stresses. These irritations may become preoccupations; I may find myself intensely focused on those behaviors, waiting for them to recur; I may be talking to myself in repetitive ways that have the effect of intensifying my irritation, while at the same time justifying it. My focus may be exclusively upon the other person with a corresponding lack of attention upon myself and my own body. The underlying assumption is that the other person is causing me to feel grouchy and if only he or she would stop complaining (as usual!), I’d feel better.

I’m familiar enough with the process by now to recognize it, though without exception, I fight off that recognition every time. I’ll hear myself thinking something like, “Yeah, but this time is different. That really is irritating.” With effort, I can silence such thoughts. Silence is key, at least for me; as a fairly verbal person, I find the thought processes that support and justify the projections come in words. Putting a stop to those words and focusing on my breathing is a crucial first step. Then I have to shift the focus of my attention away from the other person and into my own body.

I “look” in various places: my back and shoulders where I carry tension, around my eyes where I register fatigue and sadness, in my belly where I feel hunger and other kinds of longing. I may notice that my back hurts; I may have the beginnings of a headache. Often I discover that my body feels tired and a little achy. I try to hold onto these sensations without “explaining” them in reference to someone else, a difficult and uncomfortable experience. In the end, I may realize that my own day was stressful, that rather than feeling the depth of my own pain and stress, I’m projecting it outside into someone who complains and whom I mentally criticize.

This is a simple example of owning a projection, and one that many of you will likely be able to replicate. It’s more difficult when we’re projecting experiences such as shame or neediness. In those cases, our entire character structure may be organized around validating the reality of the projection. The characteristic defenses against shame, for example, have as a common goal projecting damage or unworthiness into other people and then treating them in such a way as to insist upon the validity of the projection — by blaming or regarding them with contempt.
Finding Your Own Way:
Experiment with grouchiness and let me know what you find. Does my description of the process hold true for you as well?

Next, think about other areas where an intense focus on or preoccupation with someone else may indicate that a projection is at work. Do you find yourself dwelling on somebody’s else behavior or personality in an intensely critical or angry way? You may have legitimate reasons, but you may also be projecting something into them.

Some other feelings that may indicate an underlying projection: contempt (projection of shame), feelings of superiority (projection of neediness ), recrimination (projection of guilt) or envy (projection of an idealized fantasy). I don’t mean to suggest that these are always signs of projections, but when joined to an especially intense preoccupation with the other person, they’re a strong indication.

Notice the polarity involved in these projections: I don’t complain about stress and it annoys me that you do. I feel no shame about my own damage but you’re a contemptible loser. I’m not needy and pathetic like you because I’ve got it all! I did nothing wrong and you’re entirely to blame.
Posted by Any Human Heart at 12:42