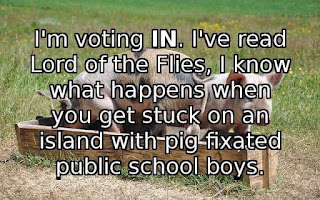 On remaining European in your hesrt two years on.....
. I think back to this time time two years ago and I feel the closing of our minds that began on June 23rd 2016. When the id of the Tory party spilled out and made the whole of the UK blind. It takes me back to the whine of Nuttal and of that narrowness that has flooded our screens ever since. And then I know that tolerance is not dead and that so many of us carry an open, tolerant attitude in in hearts and minds. Perhaps all that the blue kippers did was to remind us that it was there. And then I know come what may, despite Brexit, despite the horrors of the closed mind we remain committed to the European philosophy, outlook and attitudes that will be so essential on Brexit Island
In the end it comes down to who you are really deep inside. Its the emotion for me of seeing my son, seeing my lover. It comes down to reaching outwards, it's about knowing the history, literature and culture of Europe. It's about experiences of travelling, knowing the smell of the air in the countries of Europe, it's about smiling about our own odd little ways and theirs.
It's knowing that there is more than one book, that there is no us and them. It's about knowing that Tom Paine prior to his pamphlet “Common Sense” reminded the English that they were always part of Europe, its about knowing that Europeans want equal access to knowledge and education. It's about knowing that the French think one way, the Germans another, it's about knowing that the Magma Carla was imposed by French Knights, and the Glorious Revolution by a Dutch Army, that Christmas Trees were a Victorian tradition tradition that came from Germany.
It's about knowing that even if you have done wrong, your argument is still as important and emotional and uplifting. It's about knowing that we are all immigrants, that we all came out of Africa, that our ancestors were all economic migrants, that James Dyson that great saint of the Brexit refused to place his factory in Wales. 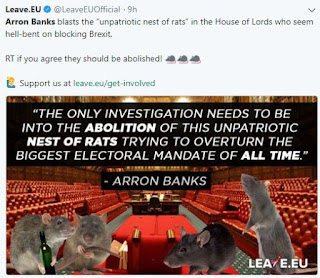 Its about the symbolism both positive and negative of last year's vote of the vote, what it will lead to and what it has lead to, how it will be interpreted and has been.. Its about how by looking at the threat of Isis, we forget the evil and poison of the far right. Its about what will come next as we leave. Its about the fact that the majority of Brexiteers worship the “free market” and the privatisation of the NHS.I look at Farage, Johnson and Gove and I my head rather than my heart is convinced I will remain and resist.

When I see London Bridge, Manchester, Finsbury and more. I see the demons of hate walk across this land and I know that I and many others will choose the path of being in the European resistance and like the leavers who struggled for 40 years . So will I as long as I am here.And I will reamain a proud European. there will be those who willuse the accusation that I am un patriotic, un British, a traitor and yet i know and many others like me know the history of the British Isles so well, we know of Wales and we know the links streatching back and if there is a Europeasn citizenship the made available i will take it as will others. Each abuse, each swaer word each claim of being un patriotic convinces me more and more of the value of Europe and its influence over us. I will not be stuck on brexit island with xenophobic idiots who know nothing of their history, culture and origins.
Posted by Any Human Heart at 12:28