”
The collapse begins. The events unfurl. Who could have seen the collapse of the returning grammar schools and Fox hunting will not return. Hard Brexit wilters on the vine. May has the choice and power at any price brings its own problems. Stuck between the competing claims of the DUP and the revenant of UKIP the Tories approach meltdown. The  month of Jume 2018brought a shift of paradigm and with it a new outlook and a new possibility. A new Coalition has been born. The Tory DUP coalition is a coalition of callous hard faced individuals. You look at the hard, pinched face of Arleen Foster and you sense layers of prejudice and bigotry that reaches back 400 years. The words *Conservative and Unionist party summon up the Protestant ascendancy and the Orange orders march again.


May is caught between the desire of the DUP for no welfare reforms and an open border cannot satisfy the blue Kippers in the parliamentary party. And she is tired and the world has changed.
We are waiting for Corbyn. People you never expected praise him and the Blairites and Brownies eat humble pie. the  The  c last general electionnow seems inevitable. Some of us saw it coming but we were laughed at, mocked and yet we were right.

Trump will  come here on July 13 and get a reception he never expected.. Both he and May will be gone in a few months. The tide turned and the populist right is pushed back. The dustbins of history are filled with copies of the Daily Mail and the Sun.

The possibilities have changed , a grim Monday that I once feared never came. In Wales we will not be a naked people under the acid rain of a Tory government. The old ways have failed we stand liminally on tbe edge of a new future. Let us embrace it.....and all these things not  twos year from Brexit..events, dear boy, events...

the end is coming but like a drunk on the ledge..the Tory party staggers on..how long how long..will no one one frre us from the obscne government.......


Dr Phillip Lee said the move was due to his intention to back a plan giving parliament power to direct Ms May’s approach, something the prime minister is determined to avoid.
He also went directly against official policy in saying that the government should “go to the people, once again” for a decision on the final Brexit deal. 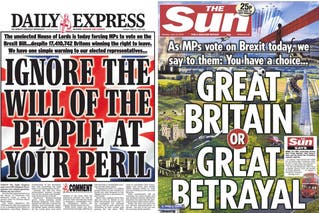 
The ex-justice minister said he is “incredibly sad” to be leaving his job, but argued that he could “better speak up” for his constituents on EU withdrawal once off the government payroll.

ADVERTISING
inRead invented by Teads
Despite demands for unity from Downing Street, Dr Lee received some immediate support from colleagues on the backbenches, with his departure even sparking muttering that other junior ministers may walk.

Dr Lee has openly said that he backed Remain in the last referendum and has previously criticised the government, saying that it should focus on “evidence, not dogma”.
In a series of heartfelt tweets on Tuesday, he wrote: “If, in the future, I am to look my children in the eye and honestly say that I did my best for them I cannot, in all good conscience, support how our country’s current exit from the EU looks set to be delivered.