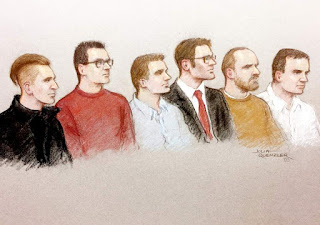 A trial started this morning at the Old Bailey of six alleged members of National Action, a banned terrorist organisation. One of the six, Jack Renshaw, has pleaded guilty to preparing an act of terrorism by plotting to murder Labour MP Rosie Cooper, and threatening to kill a police officer, Vicky Henderson. Another is charged with assisting in that plot. All six deny the charges of membership of National Action.

This trial has come about, and the evidence against Jack Renshaw, was brought to the attention of the authorities due to the direct work of HOPE not hate. , Nick Lowles,  Head of Research, Matthew Collins, and one of our informants will be key prosecution witnesses.

This trial is serious. National Action is a dangerous nazi group, banned as a terrorist organisation in 2016. They have their roots in the BNP's youth wing. They've conducted harassment campaigns, and had a slick social media operation. They have long talked publicly about being ready to commit acts of violence.

Because of some strict legal restrictions, there is a limit on what we can say publicly during the trial. We will try and update you all as much as we're allowed to over the next weeks and hopefully we will be able to tell the full story once the trial is over. In the meantime, we've set up a page on our website so you can follow how things pan out.
Posted by Any Human Heart at 17:45