How Tocqueville Predicted The Rise of Trump 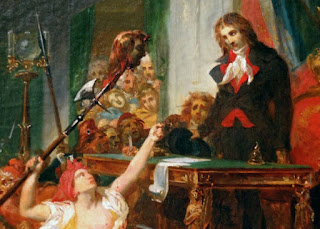 Several years ago, The Economist published an article about how China’s leaders were reading Alexis de Tocqueville’s Ancien Regime in earnest. China’s elites, keen to remain in power despite the significant disparities between those ruling and those ruled, were closely studying eighteenth-century France in order to avoid the fate of France’s ruling class. (Whether the study of Tocqueville will help remains to be seen.)

The fact that China’s rulers, 160 years after the publication of Ancien Regime, are more interested in studying his opus on the French Revolution than Americans are would undoubtedly baffle Tocqueville. What would not baffle him is the wrath of the abandoned American commoner. The populist wave that has swept the nation is without parallel in American history. Represented principally, though not exclusively, by Bernie Sanders and Donald Trump, it features complex, interwoven elements of progressive, liberal, nativist, reactionary, and classical liberal thought. It also features complex economic and foreign policy dimensions. It is, in essence, a thorough rejection of the established order. Thus can Daniel McCarthy of The American Conservative cast a vote for a socialist in the interests of “peace and gridlock,” while Susan Sarandon ponders support for Trump in the general election if Sanders is not the Democrat nominee. There is polling evidence that some supporters of either Trump or Sanders might cross party and ideological lines to support the other anti-establishment candidate in a general election. This suggests a deep lack of confidence in America’s governing institutions. Contempt for the public culture, Wall Street, and the media is palpable as well.

As Trump emerges the presumptive Republican nominee and Sanders continues to win primaries, the moment seems to be lost on many D.C. insiders. In Washington, one gets the sense of complete detachment from the angry nonelite mobs—left, right, and center. It may well be similar to the experience one might have had visiting Versailles on the verge of Revolution in France, the sense of detachment from the rest of the nation’s daily reality. This is what it looks like when the interests of ruling class and ruled diverge.
Tocqueville noted that the medieval order was sustainable so long as the lives and interests of noble and peasant were bound together. “The nobles possessed annoying privileges, enjoyed rights that people found irksome but they safeguarded the public order, dispensed justice, had the law upheld, came to the help of the weak and directed public business,” Tocqueville observed. “As the nobility ceased to conduct these affairs, the weight of its privileges seemed more burdensome and its very existence was, in the end, no longer understandable.”

The Bourbon kings, suspicious of nobility, gathered them all in Versailles where they could be monitored and distracted or deterred from plotting against the crown. Pierre Royer-Collard, in a famous 1822 lecture (at which Tocqueville, then a student, was almost certainly present), identified the rupture that took place before the revolution, and was a necessary ingredient: “the atomization of society,” by which he meant the destruction of the medieval order in which ruler and ruled were bound up together by bonds of mutual service. The nobility was gradually supplanted by the intendant, ignoble bourgeois bureaucrats, making the French, in Royer-Collard’s words, “an administered people.” Tocqueville understood well the duties that the nobles owed to the people and that their abandonment of their duties for the allure of the decadent court life of Versailles was a betrayal. He also noted the great irony of the Revolution in France—that it was only in Anjou, where the nobles had refused to abandon their duties for the opulence of Versailles, that nobles and people rose up together to protect the monarchy. Here were the last vestiges of the old order, of medieval France—and as far as the peasants were concerned, it was worth preserving.
Nearly a century later, Hannah Arendt turned to Tocqueville in her Origins of Totalitarianism. While Arendt acknowledged that her analogy ultimately limped (it has been the subject of much scrutiny since), her summary of the diverging interests of French nobility and commoner merits rereading today:

“According to Tocqueville, the French people hated aristocrats about to lose their power more than it had ever hated them before, precisely because their rapid loss of real power was not accompanied by any considerable decline in their fortunes. As long as the aristocracy held vast powers of jurisdiction, they were not only tolerated but respected. When noblemen lost their privileges, among others the privilege to exploit and oppress, the people felt them to be parasites, without any real function in the rule of the country. In other words, neither oppression nor exploitation as such is ever the main cause for resentment; wealth without visible function is much more intolerable because nobody can understand why it should be tolerated.”

“What makes men obey or tolerate real power and, on the other hand, hate people who have wealth without real power, is the rational instinct that power has a certain function and is of some general use. Even exploitation and oppression still make society work and establish some kind of order. Only wealth without power or aloofness without a policy are felt to be parasitical, useless, revolting, because such conditions cut all the threads which tie men together. Wealth which does not exploit lacks even the relationship which exists between exploiter an exploited; aloofness without policy does not imply even the minimum concern of the oppressor for the oppressed.”
Whatever the (frankly silly) talk about whether there is such a thing as the establishment: it exists. Conveniently for America’s elites, these established interests are collected in institutions in a relatively small geographic area between Capitol Hill, K Street, and Northern Virginia; and of course, there is the slightly more geographically distant yet inexorable nexus between Washington D.C., and Wall Street. America’s people may not see it fully but are increasingly aware of it.
The present resurgence of populism in America appears to seek what populist movements in general seek—a realignment of interests between the established order and the people. It is this that Sanders, Trump, and Cruz have in common. Thus can Americans rationalize the inclination toward ideological movements that approximate socialism or fascism (or what passes for them in a nation with no mainstream political tradition of either): At least these would signify a realignment of interests between ruler and ruled.

The populist anger stems from the complete abandonment of the common American and American interests in favor of the divergent interests of the nation’s elites. Both Sanders and Trump represent throwbacks to economic nationalism. But at a deeper level, it's about the divergence of the interests of the ruling and the ruled. Put simply, there was in Bourbon France as now, a breach in the social contract. This is how the history books will write about this era of populism. #NeverTrump proved ineffective because its small following, like the deracinated, powdered-faced aristocrats of Versailles, failed to apprehend the suffering in their midst and upend the established order.
Trump is, put simply, the punishment. (Sanders is as well, but is more palatable to the establishment.) The Beltway is cut off from reality, much as the occupants of Versailles were cut off from the reality around them. By the time revolution arrived, it was too late to reestablish the ancient bonds between leaders and people. Leadership and service were long since replaced by central administration. America’s political class, contingent on Washington to survive, consumes without contribution.
America, like its English antecedent, conducts its revolutions in the voting booth; the barbarism of revolutionary France is avoided in favor of moderation. Even the fringe elements of angry populism will be reconciled to the via media that is part of the Anglo-American tradition. But Tocqueville merits revisiting. Those who venture outside the comfort of the Beltway and the Acela corridor are likely to encounter the reality of a working and middle class America whose reality—and interests—are very different.
Posted by Any Human Heart at 12:30