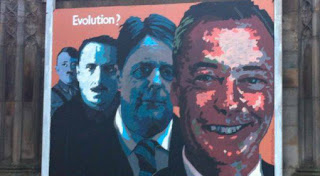 UKIP absorbs the street groups and the ALt Right.

The following article was written by Paul Mason. It comes to the same conclusions that i predicted last year. As hard Brexit fades and the Tory government begins to break down. The far right is back and as UKIP embrace Tommy Robinson and echoes shades of the SA. We live in dark times. As the MOOn reaches Full and we all bake..the demons of hate are summoned. There is a long hot Summer coming as time runs out. The government stands on the precipice. These are Mason's arguement.
"Rather than pandering to right-wing nationalism and xenophobia, the political mainstream needs to start combating it.

I’ve always said that if Brexit is the worst thing that happens to Britain - as centrism and the global order implode - we’ll have got away lightly. What it would mean not to get away lightly is becoming clear, as the forces of the UK far right converge around a single project.
Ukip, under new leader Gerard Batten, has reoriented itself towards street politics and the groups who specialise in it. On 9 June, the party took part in a demonstration to free jailed English Defence League founder Tommy Robinson, which became a drunken rampage across Whitehall, totally outflanking the police deployed to contain it.

On 23 June, Ukip joined the counter-demonstration against the anti-Brexit march, rubbing shoulders once again with an increasingly familiar set of open racists: the Democratic Football Lads Alliance (DFLA), the Veterans Against Terrorism group, whose elderly members turned up in service berets, and Generation Identity.

UKIP embraces the strret groups and the alt Right
At that march, Ukip MEP Janice Atkinson accused the Jewish financier George Soros of running a “Euro Communist” conspiracy to flood the West with Muslim refugees. Meanwhile, three key video bloggers from the US-inspired alt-right - Paul Joseph Watson, Mark Meechan and Carl Benjamin have been allowed to join Ukip. Each has massive followings on the social media platforms they are still tolerated on. Meechan is famous for getting his pug dog to give Nazi salutes as he says “gas the Jews”.

Veteran far right watchers say the two marches, preceded by a surge of mobilisations in support of Robinson, mark a breakthrough for the far right. It’s been accompanied by a change in Ukip’s rhetoric. Having focused mainly on Europe, immigration and stoking up hostility to Islam, Ukip’s billboard driven around on the side of a van last Saturday advised people to Google “Soros immigration” and “Bilderberg Group” – two classic obsessions of the anti-Semitic right.
Though the far right in Britain remains small, the 9 June demo was its biggest for decades, pulling in a clear demographic of young, white, working class men and women, and drawing on a wide online subculture of racism, Islamophobia and conspiracy theories that goes largely unnoticed by the liberal mainstream.

What we’re seeing is the convergence of three strands of far right activism that, in Britain, have remained distinct until now.
One is the hardcore of violent racists who want to pursue a “street first” project, exerting their rights to “free speech” - for example by picketing kebab shops and supermarkets selling halal meat. The three English football fans charged last week after singing “Spurs are on their way to Auschwitz; Hitler’s gonna gas them again,” while making the Nazi salute in a bar in Volgograd, are emblematic of that tendency.

Another is US-inspired online alt-right activism. Paul Joseph Watson, newly issued with a Ukip membership card, has 800k+ Twitter followers and a huge audience in the USA, where alongside Alex Jones, on the internet channel Infowars, he peddles conspiracy theories and fake news. The point about the online alt-right is that it comes with a heavily theorised (if largely incoherent) conspiracy theory of the world that traditional British fascism lacked the brain cells for.
In their world, mass migration has turned western cities into hellholes of crime, rape and murder. Western civilisation is under threat. Culture war has erupted into real violence and the only question remaining is when does the shooting start.

The point about the alt-right is that it’s international. It has serious money and organisational expertise – which anti-fascist monitoring groups believe is now being used to mobilise around Tommy Robinson in the UK. And its agenda is international. A murder in Sweden, which would never make the news in Britain, becomes a lurid headline on Breitbart and is spread among grass roots Ukippers and politicised football fans to the point where it becomes folklore in the pubs and clubs of Britain.

The liberal intelligentsia neither knows or cares; the mass media is oblivious; and their combined indifference provides further proof to the conspiracists that this important story is actually being suppressed by the establishment.

The third element in the mix is Ukip. And where it’s all going is clear.
Over the summer, Theresa May will have to level with the hard-right Brexiteers in her cabinet and parliamentary party, that Britain is going to end up in a customs union, a single market for goods, most likely permanently aligned with the EU on services and committed to something very close to free movement. It will be paying money to Brussels and it will be subject to judgments by the European Court of Justice.

As these facts become clear to the Tory right they will stage a tantrum but not a walkout. That opens the political space, not just for a Ukip 2.0 party, but for it to re-emerge with two new “wings” – its street wing, largely middle-aged football “lads” and a few ex-servicemen; and its online wing, fuelled by the international alt-right, egged on by the ruling Lega party in Italy and the coalition of xenophobes that governs Hungary, Austria and Poland.

The liberal centre is, as always, clueless about how to defeat far right politics. When I commented that the BBC News bulletin on 9 June had actually failed to report a major far right riot in the centre of London, numerous people said “good”. Better not to give them publicity has been the liberal centre’s excuse for failing to fight fascism since the 1920s.

Unfortunately, they don’t need publicity anymore. The combined following of the big three online activists who just joined Ukip runs into millions. Money, expertise and energy will be poured into overlapping networks to resist the “betrayal” of Brexit. That is the far right’s script from now until March 2019.

And after that, as global businesses flee Britain, as growth stagnates, will come the search for scapegoats. On this, if on nothing else, Tony Blair is right: it leads in a 1930s direction.
What should be done

By the Tory government? Stop pandering to the agenda of the racist right; be honest with the British people that hard Brexit was a chimera; deploy the full panoply of security measures to deter and monitor the violent projects of the racists. For clarity, unlike many on the left, that means I am in favour of state suppression of fascist groups.

By the liberal centre? By all means protest against Brexit and demand a “second vote”. But understand that decent, Labour voting working class people now have to live in communities and in an online space polluted with the “stab in the back” narrative. If there is a second referendum, the concessions already made by Theresa May mean that a hard, no-deal Brexit is already off the ballot paper. The choice would effectively be between accepting what May negotiates and staying in. The political forces of xenophobia and racism in Britain will at this point be supercharged.
If Britain’s multi-ethnic cities then become targets for a campaign of racist marches against the Brexit “betrayal” it is incumbent on every democrat to turn up and confront – yes, confront – the kind of people who marched on 23 June changing “Whose streets? Our streets?”

As for the broadcasters, they now face serious dilemmas. The BBC in the run up to Brexit booked Nigel Farage an almost permanent seat on its primetime outlets. With Ukip’s turn to outright extremism, flirting with anti-Semitic rhetoric and openly backing Robinson, there should no place for them on the broadcast media, other than what is required by electoral law.
By the labour movement? Mobilise. On 14 July, the far right will picket Downing Street calling for Tommy Robinson to be freed. We should oppose them in large numbers.
This won’t be a re-run of the battles in the 1970s against the National Front and the Powellite wing of the Tories. Ukip comes with the veneer of a party that gained 3.8 million votes in 2015. There was no internet, no troll farms, no American alt-right money to spread fake news, and no Russian hybrid warfare stoking up the tensions.Above all, the far right will have a real cause celebre, to underpin all its obsessions, prejudices and conspiracies: Brexit will fail.
It will fail in the very terms the Mail and Sun have stoked up among the plebeian base of right-wing conservatism: Britain will remain aligned to the EU regulatory superpower only with reduced influence on it. It will not be “free” of Europe; it will have been subjected to a stinging diplomatic and reputational defeat.

If you then add in a Corbyn-led government, with a black home secretary and an immigration policy based on tolerance, not hostility, the far right’s script writes itself.
The progressive half of Britain needs a narrative to overcome this threat: a narrative based on shared, historic values of democracy and tolerance, backed by the return of growth and prosperity to left behind towns and cities that breed groups like the DFLA. For the purposes of argument I include Theresa May, Boris Johnson and Sajid Javid in the progressive half of Britain and ask them: faced with the developments outlined above - stop pandering to right-wing nationalism and xenophobia and start fighting it."

Last year i warned of these implications. UKIP has crossed the line. There is no middle ground anymore. be warned. I smell Weimar....