A political interlude with Bramble and Bracken. 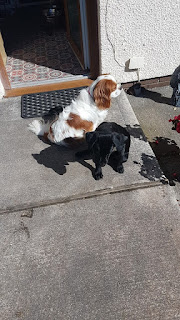 It was another wet day . As Bramble and Bracken returned from their stroll along Fisherman's Walk in Glanrhyd. Bracken turned to Bramble and asked " What is politics Bramble? " Bramble looked at him and replied " it's about how we choose how we live and what decisions we make"

Bracken looked confused. He asked '" What is the difference between Tories and Labour then? . I get very confused about some of those Labour people who don't like Jeremy Corbyn. Are they Tories in disguise?

Bramble smiled and said * Yes they are.. people who don't want all dogs to have a free vetinary service and to have equal access to all toys at the point of need"
Bracken thought a bit and then said "What is socialism?"
Bramble thought for a moment and then told him about Baxter the Beagle. 'When I was little I was often bullied by Baxter. But last week when we met him we both ran at him and told him off . We practised solidarity and collective action with one another. Now Baxter will not bother us anymore .
Bracken thought for a moment. "Ah" he said; "then Baxter is a Tory then:
'Yes he is" replied Brambke.." he thinks he was born to rule and because he is bigger than me he thinks that's the only way to be."
Bracken asked another question." But who are the Liberal Democrats"?
Bramble looked at him kindly and tried to explain. "Do you remember last week when we went to the Vets for flea treatment? Well that's what they are like. Four years ago they supported Baxter in his rule over Glanrhyd. Now they don't want socialists to challenge him again.
Bracken looked worried . Then he asked " But what are they really ? "
Bramble said "silly parasites that don't want to challenge the system but just simply live off of it withput changing it "

"Tell me about the Far Right Bramble they really worry me" he asked and looked around nervously.
Bramble explained clearly . ." You remember when you had your ears dewaxed and the vet found ear mites. Well that's what the Far Right are like."
"So why do they go on about the colour of dogs all the time.?" said Bracken.
'I just don't know ' said Bramble kindly. "I mean I am two colours and you are one .You and I and Tilly from Tawe Park cooperate together and our ancestors cane along with humans nearly 40,000 year ago "

"What are anal glands for and what comes out of tbem? " asked Bracken.
Bramble laughed and and said " Something nasty and smelly that thinks its the master poop."
So that's why Martyn puts our poop in the dustbin of history, is it ? smiled Bracken
"Yes that's enough for your lessons today. I will introduce you soon to the Socialist dogs of Ystradgynlais to continue your education" concluded Bramble and yawned deeply
Deep in thought the two dogs drifted off into a deep sleep and dreamt of food.
A few hours later Bramble thought." In some decades nothing happens yet in some weeks decades happen. I shall teach Bracken false consciousness and superstructure next....
Posted by Any Human Heart at 11:55