Fascism then and now Asclepius Course Thursday October 31 at 2pm 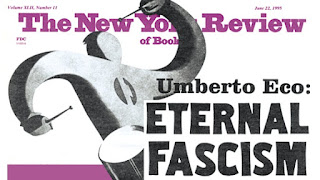 In 1995, Italian novelist and philosopher Umberto Eco wrote a piece for The New York Review of Books on fascism.
As part of the article, Eco listed 14 features of what he called Ur-Fascism or Eternal Fascism. He began the list with this caveat:


These features cannot be organized into a system; many of them contradict each other, and are also typical of other kinds of despotism or fanaticism. But it is enough that one of them be present to allow fascism to coagulate around it.

Here’s an abbreviated version of Eco’s list:
1. The cult of tradition. “One has only to look at the syllabus of every fascist movement to find the major traditionalist thinkers. The Nazi gnosis was nourished by traditionalist, syncretistic, occult elements.”
2. The rejection of modernism. “The Enlightenment, the Age of Reason, is seen as the beginning of modern depravity. In this sense Ur-Fascism can be defined as irrationalism.”
3. The cult of action for action’s sake. “Action being beautiful in itself, it must be taken before, or without, any previous reflection. Thinking is a form of emasculation.”
4. Disagreement is treason. “The critical spirit makes distinctions, and to distinguish is a sign of modernism. In modern culture the scientific community praises disagreement as a way to improve knowledge.”
5. Fear of difference. “The first appeal of a fascist or prematurely fascist movement is an appeal against the intruders. Thus Ur-Fascism is racist by definition.”
6. Appeal to social frustration. “One of the most typical features of the historical fascism was the appeal to a frustrated middle class, a class suffering from an economic crisis or feelings of political humiliation, and frightened by the pressure of lower social groups.”
7. The obsession with a plot. “The followers must feel besieged. The easiest way to solve the plot is the appeal to xenophobia.”
8. The humiliation by the wealth and force of their enemies. “By a continuous shifting of rhetorical focus, the enemies are at the same time too strong and too weak.”
9. Pacifism is trafficking with the enemy. “For Ur-Fascism there is no struggle for life but, rather, life is lived for struggle.”
10. Contempt for the weak. “Elitism is a typical aspect of any reactionary ideology.”
11. Everybody is educated to become a hero. “In Ur-Fascist ideology, heroism is the norm. This cult of heroism is strictly linked with the cult of death.”
12. Machismo and weaponry. “Machismo implies both disdain for women and intolerance and condemnation of nonstandard sexual habits, from chastity to homosexuality.”
13. Selective populism. “There is in our future a TV or Internet populism, in which the emotional response of a selected group of citizens can be presented and accepted as the Voice of the People.”
14. Ur-Fascism speaks Newspeak. “All the Nazi or Fascist schoolbooks made use of an impoverished vocabulary, and an elementary syntax, in order to limit the instruments for complex and critical reasoning.” 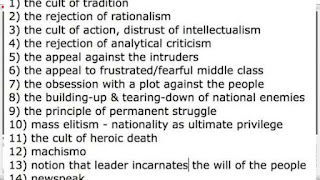