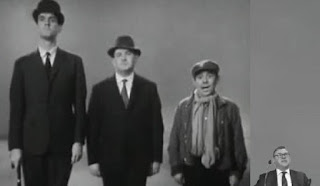 It was Julia Kristeva who coined the term abjection. It refers to a denial of your origins while at the same time understanding them perfectly Additional reflections can be obtained from Leo Abse's book "Margaret; Daughter or Beatrice". In it Abse argues that Margaret Thatcher hated welfare and socialism because of her dislike of her compassionate caring Mother rather than the narrow small shopkeepe

When we come to Mark Gino Francois we too see the same process. Given two European names we see him loath everything beyond the English Channel, and he apes the discourse and champions the prejudice of a particular lower middle class outlook. One wonders if anything could be made of a rebellion against his father or mother for the imposition of the names. He stands and talks like a parody of a character from a 1970s British situation comedy like "Dads Army" " it ain't half hot, Mum" or "Are you being served" . He loathes everything tolerant, continental and open. He even uses phrases "poor bloody infantry". He is an archetype of parody long mocked and embarrassing to everyone born in the UK.

With Nigel Evans MP from my home town of Swansea we all sense the anger fueled by long sessions in the bar of the House of Commons. Nigel voted to limit legal aid yet in his own legal case moaned of the destruction of his own life savings As many of you know I went to Dynevor Comprehensive in Swansea as did Nigel. We in the Lower Sixth were the first comprehensive stream while Nigel and his right wing mates considered themselves Grammar school and therefore superior. However young Nigel's family ran the local small shop in Graiglwyd Square in the vast Council estate of Townhill. NIgel told everyone in the school that he lived in Cockett . He obviously clearly felt that stays was about where you lived.

As I consider young Gino and Nigel I clearly see the power of the term abjection. In my own case I went to an English Prep school and learnt to spot how infected the Tory Party is with such subjects as these two likely lads. Those who know the English lower middle class realise the toxicity and ignorance that they are. It's left me with a bloodhound like sense for them and a realisation that the lads who ape these behaviours have a deep and lasting loathing for Marxists like my self who have a real knowledge of the frothy "charm" of the English class system. This too is my curse of my own sense of abjection. Yet having had a wide education in many types of school, having travelled widely and read extensively the antidote is readily available. We are all challenged to deal with our prejudices and conditioning..the question is do we have the courage to stop the fog in the channel getting into our eyes.. Autumn should be the season of tbe stag howling the season of Hydref and not of these snake like servants that are Nigel Evans and Mark Gino Francois the Gwas Y Neidr...