Tuesday thoughts and nightmares. ..fascism cones to many as a friend. 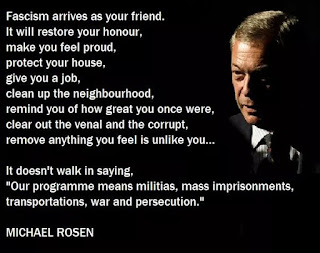 The tensions tighten and heighten as the moon wanes. The totalitarian action of the Met Police begin to resemble the actions of the right wing security forces of history. Yet all that will happen us that more will flow in to the capital and more regional actions will take place We shall see the rise of more awareness , more understanding and of course the discovery of more gammonesque prejudice amongst a certain group of a certain age and outlook. As we near super Saturday and the Boris deal runs out of track the tensions grow and tempers fray and grow bitter.


As we near Samhain the collective both consciously and unconsciously invokes and evokes personal demons into the political and social milleau. A critical mass begins to build and as the days shorten our choices and options are limited and are made more stark.
There is an axiom that if about 3 or 4 in a hundred people take to direct action then the state and structure breaks. We are reaching a point where this become a possible. Perhaps a new 1968 event of Parisian proportions comes to us.
I notice that across many observations and comments the coming crisis nears As a 93 year old woman reads a meaningless speech full of propaganda and spite, the meaningless unwritten constitution of the English state is laid bare. A crisis is a chance to change yet so few are aware of the unfolding of events.

As the Turkish invasion runs on and the incoherence of Trump' s policies made clear in the growing darkness new possibilities and patterns grow. Part Hegelian, part Gramscian and part post modern all things are believed and all things doubted .
For the first time since the Spring both major parties reach 33% and 30% respectively...
The NFU are upset by an advert promoting meat substitutes arguing that it risks a balanced diet. The NFU says nothing about how meat consumption links in with climate change.
In the Bulgarian match Nazi salutes and racist attitudes are released from their frozen in aspic store. We rush towards a critical moment a point on the timeline where the critical mass reaches an alchemical moment of transformation. And it's only Tuesday and my bus reaches Pontardawe ..what will happen today...as Margaret Attwood wins the Booker prize as Gilead becomes part of the meme of the right.. we all wait for today and as I glance around the X6 we all are asleep, hypnotized by our phones or lost in thought ...good morning...I fill in a form to join Extinction Rebellion it's time for a local group in Ystradgynlais.
Posted by Any Human Heart at 12:41