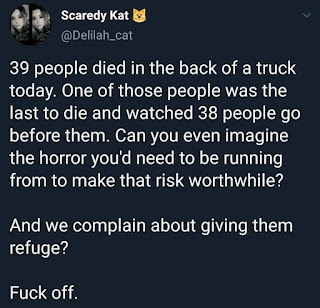 Winter is coming....this period begins to resemble more and more that of the rule of Walpole in the early decades of the 18th century. As the "do or die" pledge to fall in the ditch empties out. A poll shows that if we do not leave by October 31 that Labour moves into the lead. In Llandrindod North a bland boring Liberal Democrat wins the seat in a by election while the warn, campaigning and radical Labour candidates gains 20% of the vote. As deja vue comes round again via another extension we find the sheer Gobbels like prpagangada of the Lib Dems spews out into the world. I reach the point where I dislike them more than the Tories. At least the Tories are foul without pretending to be fair. Odd and bizarre rumours circulate on social media of Kompromat concerning swindleson and others in her circle. Is this fake news or indeed an echo of what lurks beneath..we cannot yet know....


The phoney election moves on a notch. Social media and the frequency of political meetings increases on all sides. The mornings are darker as we near Samhain and the changing if the clocks. The corpses in a refrigerated lorry bring home to us all the consequences if a Btrexit discourse beloved by Farage and his Brexit gammon. On social media the gammon rage and demand payment by foreign governments for removal of the dead.

We see the myth of tolerance in large areas of the "liberal" West country in the racism of the Yeovil football crowd. As we see the lack of diversity amongst the Fib Dems and their natural allies the Tory Party we quickly realise that the coming election is about the soul of the UK and whether it is diverse open and caring. When the EU confirm the extension the day of Ragnorak will come in the form of a general election that we determine who we are for a generation. The same figures on the Labour Right warning of doom said the same thing in 2017...how predictable..

The thirty nine people in the truck facing death in the cold and the dark are a metaphor or allegory for what we are becoming. Yep winter is coming it really is ..
Posted by Any Human Heart at 12:00