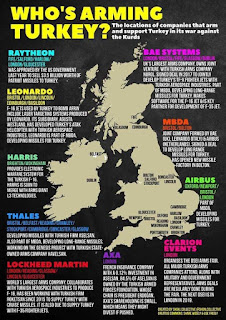 .It was Trump' s tweet that sent in the Tanks. It was Theresa May' s arms deal with Turkey that is now being used to rain down death on the Kurds of Northern Syria. It was Trump and Erdogan the "strong men" of post modern fascism, promoters of death from the skies: purveyors of social conservatism and now the liberators of 10,000 captured Isis soldiers that now step into a new apocalypse. In Erdogan's parlence this is action against terrorism yet it is a liberation of terrorism The arms dealers, the weapon manufacturers, the creators of the arms and the western political leaders carrying arms dealers on their diplomatic trails who are the guilty. Yet according to those who promote blood and death it is Jeremy Corbyn who speaks out against the arms trade who is the friend of terrorism.


As ethnic cleansing comes to northern Syria, the perfectly organic Gammon of the right run from the reality . Perhaps deep within they too within their shadows dream of ethnic cleansing here. They circulate amongst themselves a picture taken from the Nazi Holacaust with the heads of 'remainer traitors' being taken to a remainer camp. These are the shadows and deep hates flowing through the political discourse. From Syria to Southhampton and Glanryhd to Guernica the savage cult of the strong man and the crypto fascist discourse surrounds us. How much titanic hate is out there? how much prejudice and loathing?.

And here as we reach the week culminating in Super Saturday the poison of Brexit spills out and feeds the demons of hate. As Swinson buries her head and in Poland Social conservatism triumphs we all draw ourselves up to face the significance of these cultural, economic and political trends. What will happen ? And as all wait in fear, hope and horror there is a full Moon shinning in the Monday sky as I head to work and the Boris deal false birth turns to termination..
Posted by Any Human Heart at 13:08