Some Friday thoughts on Brextasy 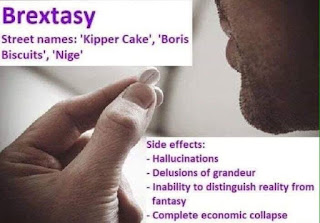 Some Friday thoughts on Brextasy..Looking back we can clearly see that the Brexit vote of 2016 was more of a symptom of globalisation rather than of its cure Yesterday I was arguing on a local page concerning the issue with a local kipper. He claimed that globalisation had nothing to do with Brexit and seemed to be confusing terms like "Bretton Woods" with "Brecon Woods". It became pretty clear that for many kippers an analysis of globalisation simply returns them to a discourse of the myth of Free Trade and of the British Isle set in a silver sea. Its of no value to point out that we have had a globalised world economy since the 18th century. It's no point pointing out that the slave trade laid the foundations of our present economic order and of attitudes to race and ethnicity.
The myth of sovereignty has been used as a simple solution to the complexities of the modern world economy. Farage and friends sell a form of snake oil that is attractive to those that don't want to keep learning or reflecting on reality.

I guess that in 1975 had I been old enough I would have voted no just about.. However nearly 50 years later the world order has moved on and the complexities and processes have linked us in to a vast cartel than has a myriad of effects and forms. We can check out anytime we like but the web and labyrinth of these years means that short of the collapse of late capitalism we can never leave. These subteties will fall on stony ground for many gammon kippers.

The problem we now have is a situation of unintelligible paradigms produced by the popular press.
What can we do to explain the significance of the enlightenment and of social theory that they have never taken part in? The role of socialism is to educate and inform and teach the methods of critical thinking. Yet for many kippers insisting on their individualism we see it is little but a flight from the modern diversity of gender, sexuality and political identity that is the nature of modernity.
There is often a claim made that the kippers are the true individualists against left indoctrination . Yet wherever you look read or research you find that that many of them think that multiculturalism is a risk , that #MeToo is a witch hunt against men and that transgender and gay rights are a threat. I suggested yesterday that I had a pint with my critic to discuss the issues I found that like so many of them he refused. The sense of ontological insecurity is very profound in many men of a certain age.
Tony Benn argued that socialism is a process of information and of critical thinking that challenges the economic, cultural and uninformed outlook that we all have. For many it is too late and they will never learn to challenge their comfortable sense of "numb" .

However there are many who do and I celebrate them and their courage. I try to challenge myself regularly and to know my shadow and blind spots. There can be bitter and desperate realizations and many wonderful and rich celebrations of ourselves. Yet for some wanting simple solutions for complex issues this is not the path. When Halloween spirit with its social disorder meets the eve of Brexit in reality or anticipation a deadly cocktail will be made. I am sorry for the kippers lost in myth but unfortunately I see little hope of realisation or awareness dawning upon them. And I suspect Mr Oddy that you have no interest in or appreciation or comprehension of my words....

I was very gretful to have this account of Mr Oddys views illustrated  I feel that I must comment on the guy that admins the Newsdesk Ystradgynlais page. I have reported his comments on his other FB page this morning where he asked the question "where are all these bum bandits coming from" in reference to the latest Sam Smith Video. This, I feel is complete unacceptable. Mr. Oddy, you are an ignoramus. The "Newsdesk" contains very little information about Ystradgynlais and is, generally quite negative. I look forward to his response. 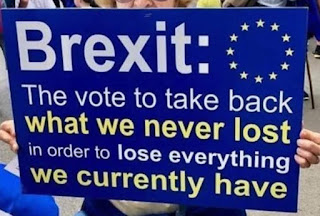