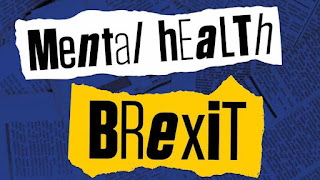 I have found over the last few weeks a darkening of people's moods, tolerance and out look. I too have feared and seen these observations. The tragedy is that a Brexit hope will turn to ash and then as we turn inwards projection and displacement will occur upon others.tben when this solves nothing the bitter feelings will turn upon ourselves. Brexit is a false psychological hope that cannot solve the problems of ennui and ontology. It will consume Boris Johnson and Farage in time as they will soon be as loathed as Tony Blair was after the Iraqi War.

Our society creates alienation and hopelessness. Consumerism can solve nothing and as we reduce ourselves to gears in the machine of late capitalism we look for ever more instant fixes such as racism, and xenophobia we find each fix unhinges us more. Go to Reich and Fromm and you find explanation from the "fear of freedom" to the rise of Fascism. From Nietzche's last man to Eliot's "Hollow men" we reach the illusion of Brexit and find it wanting. From the growing and increasing classification of young people as having borderline personality disorder or narcissism placed upon them by the powerful we stagger on. The problem is our society and not the individual. It is Rosseau rather than Hobbs and yet 65 % stand unknowing that it is capitalism that makes us sick. Brexit will end not with a bang but a whimper...but for many the psychological effect will be immense.

Ministers are being told to prepare for a rise in suicide in the event of a chaotic no-deal Brexit, according to a leaked document seen by The Times.
Officials say that in the event of Britain leaving the EU without a deal and on unfriendly terms, they must “create a strategy with other government departments — handling the negative impacts (eg homelessness, poverty and suicide).”
Posted by Any Human Heart at 12:20