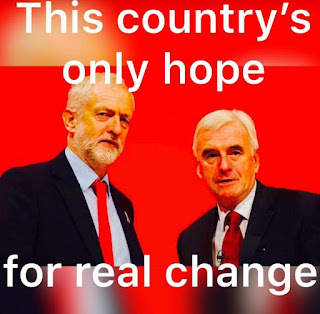 And now the DUP, the sixteenth century Calvinists and the Eighteenth century ERG have more influence over the Brexit process than the Scottish, Welsh and Irish people. The DUP in all their denial of evolution, feminism and equality allied with elitism and the Nanny worshipping psyche of Rees Mogg. As the narrowness of the small shop keeper discourse of Nigel Evans and the "just" lower middle class outlook of Mark Francois grows we realise the true nature of Brexit will be to strip us of workers rights and environmental protections. As preparations begin for a patriotic Brexit election we know that if Johnson wins we know the nature of the policies that will come next.

We see a government emerging that will be as tardy and vile as the 1919 national government and of the 1931 one. The tardiness spills out and when the illusion of patriotism has gone and the brutal men so resembling Rex Mottram rule over us I shall say simply I did try to tell you.
However as the election nears and Labour's radical and reforming programme offers a new society and approach greater than 1945 I say to you that its all up to you....

And the real "horror" dawn's on Dame Ellman.. Jeremy Corbyn could well become Prime Minister and begin a massive social transformation....and the good Dame can't allow that particularly when the Lib Dems have their arms open wide....and of course she was facing a trigger vote. .odd that.