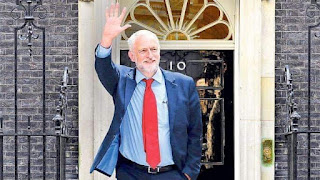 ...As Pritti Pattel stir the Tory Gammon sleeping in the hall with her viscios bitter words of vengance we see how they will play the game of thrones. It will begin as a Brexit election. Then as the days go by other more powerful issues will arise and move into the political consciousness. Then the Tory lead will falter and fall back. Cummings will seek to promote the election as people versus parliament. Some of the white working class males will flock to the pied piper but as his tune runs out of energy and variety a high proportion of this group will wake up.

An attempt is being made to force the opposition into taking blame for the extension. As the campaign develops it will grow bitter and more unpleasant. There will be the growing risk of a far right riot and possibly worse. During the campaign Boris Johnson will make many gaffs and Jo Swinson will grate on a growing number of people . As the campaign runs on into December Labour's activists, Corbyns campaigning and the social media effort. and Labour's organisation will make the difference. As the days go by a steady rise in Labour's vote will rise as remainers and progressive leavers forge new possibilities.
Its all to play for as the campaign winds slowly on. Each day is different new events beckon and arise as the drama is played out. As the tension and pressure increases Boris Johnson becomes angrier and makes more mistakes as time goes by. He loses his temper in press conferences and walks out of several interviews. The pressure is massive and he cannot cope as the Labour poll numbers slowly and steadily rise . As Johnson transmogrifies into an Etonian Trump the cracks grow climaxing into self destruction. By polling day Corbyn will have a narrow majority of 1964 proportions. Johnson legacy will be as a latter day Alec Douglas-Hume.
The truth dawn's on many that if you want a second referendum you get it by voting Labour . If you want to vote remain you get it only by voting Labour. Indeed if you wish to vote leave you can only get it by voting Labout. As the Brexit election develops into a wider and more hopeful one in which Labour presents a more radical manifesto designed to begin the transformation so long denied. We stand on the edge ..
As it becomes clearer that the Lib Dems prefer No Deal to JCPM the scales fall from people's eyes and the Gammon of the Tory Right are seen no longer as the Saviours of the white working class males . The future is coming..but there is much to do and many treacherous and narrow paths to tread. There is a world to win but the odds are finely balanced ..it's up to us all to decide the society we want...and if I am wrong the only self defence mechanism I will have is schadenfreude..the road is long but the end is near..
Posted by Any Human Heart at 11:52