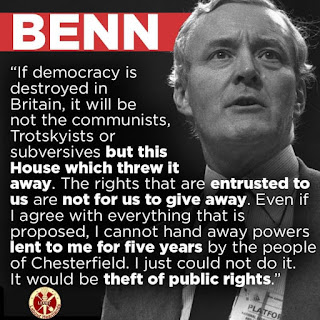 It's a cold October morning as John Simpson makes a valid point ion a recent tweet. The issue is not that a sullen group of remainers are seeking to frustrate Brexit the truth is that the population as a whole are balanced equally between remain and leave in most organisations change occurs when two thirds of people vote for it. This is the nub of the problem. The crisis coming is that the system is broken, out of date and irrelevant. The Labour party must clearly show that it is neither a remain or leave party but instead rather a socialist party. We need a system change not a tinkering with the system. The crisis is here neither remain or leave will fix it. The problem really is about those who own but do not work and those who work but do not own. Read the first two chapters of Marx's kapiral volume 1. You will see the UK in 2019 looking back at you...whoever you are, whatever you believe read and reflect. 110 pages of legal text is not the solution it could never be...and we are motled fools if we think it could..


As I listen to Radio 4 discussing our leaving at College Green I hear the raucous voice in the background rave about Brexit. I think of the shrill simplistic solutions of Swinson and know that now neither solution will solve a thing . It's not about leave or remain.. just what are leaving or remaining in? The world of neoliberism died in 2008 and the bucaneering Brexit dreams of the leavers in the 18th century. It's now socialism or Barbarism.

And as the riots speed from Catalonia to Chile and on to Lebanon we see the problems and the pitfalls. Remain in what? Leave and go where? The questions multiply and the options grow ..it's up to us....to choose how we live and have our being...as the Canadians reject austerity... perhaps we see an echo of things here..
Posted by Any Human Heart at 12:18