Come off it Caroline it's really a unite for centrism. 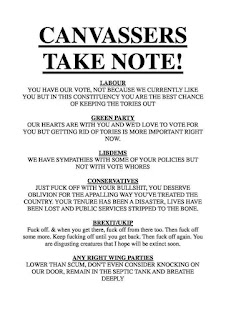 Over the weekend a Green party activist weote the following "At this moment in time I am still a Green Party member, but I am absolutely dismayed that the Greens are having ANYTHING to do with the Lib-dems let alone forming an electoral alliance with them for the sake of (potentially) a couple of extra seats.
I have campaigned with the People’s Assembly for the last 6 years against austerity as well as being a Green, and the Lib Dem’s (now rammed with actual Tories!) have been a Tory supporting pro austerity Party who have shown themselves to have absolutely no scruples or allegiance to working class people.

Extreme, remain obsessed Lib Dem’s are part of the problem not the solution and I am baffled that the Green Party has decided to enable them in what could (but won’t!!!) lead to another 5 year Tory/yellow Tory austerity apocalypse.

This election should be about climate, of course it should, but it should also be about removing the Tories from power come hell or high water, getting Jeremy Corbyn into Government and reversing austerity, renationalising our public services & industries, kick starting the green industrial revolution that we all want to see. It should not be about remain. People are dying out there thanks to the Lib Dem’s aiding and abetting the Tories in the first place!!"

This is a dark day to be a Green Party member. The Greens were far further to the left than Labour were in 2015 but Corbyn is offering us 90% of the policies we value so dearly so surely we should be supporting the removal of the Tories as our priority and then campaigning against a future Labour government for the remaining 10% of our policies. Getting into bed with the unscrupulous, duplicitous, pro-austerity and ultra remain obsessed Libdems is pure insanity and will be seen as such by all the people who are suffering soo much out there in our communities.
Seriously not impressed.


Come off it Caroline it's really a unite for centrism...I reflect upon the Unite to Remain alliance between the Fib Dems, Plaid and the Greens The conclusion rapidly appears in mind that this is in fact a "unite for centrism" that only favours effectively the Fib Dems. If we glance at the opinion polls and look back to May of this year it becomes clear that about 5 to 6 % of former Lib Dem voters from 2010 transferred to the Greens giving them a former strata of Lib Dem votes. Unfortunately for them it has taken them to the right. U watched the interview on Marr with Caroline Lucas, she seemed muted and silent on many of the issues she would have once raised in reality she has allied herself to a party that is neoliberal, pro austerity and responsible for benefit cuts whose leader took money from a fracking company and who envisages a 2045 deadline for carbon emission targets The Labour Green New deal is radical and Mcdonnels budget challenges significantly late capitalism. The Greens are moving to the right and many are noticing this. There are things that trump Brexit and only Labour offer a confimatory vote and respect the referendum of 2016.
Over the weekend I am contacted by several ecosocialist Greens and read a long analysis of the situation from a West Wales Green member that I know well. The left of the Greens are detaching and the leaking into Labour and Momementum increases in intensity. The road to eco socialism within Labour grows as the party evolves slowly but powerfully to it's destiny. I detect an excitement all get activists as the support for Labour rises dramatically amongst the under 30s. The social media struggle intensifies as Alun Caurns and Steven Crabbe shift uncomfortably as Labour closes in. Three polls reveal a shift of 3% points in Labour's favour as the Lib Dems stall at around 15% iI's not been since 1923 that an armistice day has fallen during a general election campaign..a synchronicity? a sign? an omen? You know what happened in 1923?

As the membership of Brecon and Radnor Labour rises and Josh Morgan establishes a Labour youth presence in Ystradgynlais. The new electoral registrations reach a flood prior to the deadline in late November I notice increasing numbers of Extinction Rebellion members joining Labour. On Thursday in Brecon Labour closes in on the last remaining Tory County Council seat in Brecon the request for Labour posters is much greater than during the by election.

Floods push climate change up the political agenda as the themes of the election are revealed to be far more than Brexit. As Farage fades like a slain wrath , the threat of increasing rain waes away the ontologically insecure bitter warriors of the Brexit Party. Their climate change denials found wanting and makes barren their conspiracy theories. As a more radical and transforming Labour manifesto than 1945 waits to emerge there is no time to wait. The days come down and count down to December 12th. There are many radicals and socialists amongst the Greens, the Liberal Democrats and Plaid who are perfectly honorable people begining to realise that Corbyn has to triumph for the creation of a new world to win. There is a journey that many can share. Keep radical and keep honest Labour's journey to eco socialism I fear that the Greens have made a setious mistake with the "Unite to Remain" project. Beware Caroline you empower the Fib Dems and risk much. A Labour led government at least is coming and it can and will be far more. Choose my Green, Plaid and Radical Liberal friends you dance on the rim of the dustbin of history. Wake up and smell the coffee.. it has to be Corbyn or Johnson. Free yourself from the power of prejudice trivia and authority ..#corbynbychristmas ...
Posted by Any Human Heart at 13:08