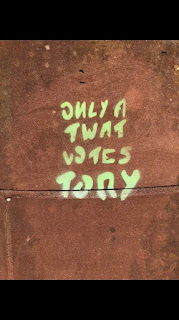 And so four weeks tomorrow under a full Moon the election will be decided. The drama builds, the social media war intensifies and the campaign intensifies. The polls show a rise in Labour support as the polls narrow and the Fib Dems flat line around 15%. The Tory vote slips downwards slowly towards the mid thirties. In Canterbury Jo Swinson tbrowws a temper tantrum. Aaron Banks tells Farage to withdraw Brexit Party candidates in Labour Tory marginal and gives him 48 hours to save Brexit and stop Corbyn.


It always was like this. Every body knows that it was always the role of Farage to convince the white male working class patriots to be hypnotized into cutting their own throats, slashing the NHS and slashing public services to the bone. Farage is a cover for the aims of the hedge fund leavers longing to increase their money stash and to do over those hypnotized pied piper like into their own demise. We still stand on the edge of 1931 but the potential is there for 1945. The result lays with us all. Kristallnacht lurks in the cold November weather Dare we face the fear of freedom? Or do we listen to our masters? It's still 1931 or 1945...the choice is yours.. dare we take it...let's see. Lanour launches it's fully costed manifesto on Saturday..do we have the courage to embrace it? Dare we? Or will we flee to the comfortable numbness of mindless conservatism or the bland statistical anodyne emptiness of the neo liberal iliberal Fib Dems? It takes courage to face change. I stand in Winterfell and brandish my Valarian Android waiting for the army of the Right King and his undead. Am I John Snow? Let us see...Winter is coming.....and it all depends on the Corbyn Johnson debates on November 19th and December 6th.
Posted by Any Human Heart at 12:58