" The Corbyn, the Swindleson and the election" 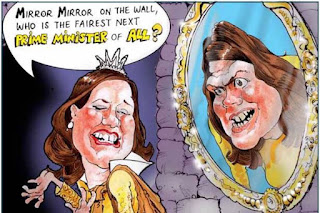 There are 28 days to go. The roads are icy in Ystradgynlais as the full moon shines down on the Glanrhyd bus stop. The ice queen Swindleson immune to her actions on austerity finds her sledge surrounded by the victims of her foul magic. As the hours tick down till the close of nominations at four the ice queen"s campaign finds itself with the wheels falling off. The decent radical lib dems once part of her entourage hear the sounds of hope and the glow of socialism. As the snow of austerity melts and a deep longing begins amongst the poor oppressed and outcast change begins. Many still under the influence if the ice queen and her ally the wolf in sheep's clothes the Boris beast plans to replace her once the next full Moon is here. Coming soon a new film " The Corbyn, the Swindleson and the election" watch the ego, the ambition and the drama. Watch Swindleson scheme, watch Boris hide his ambition and see the liberation begin. A film about those who are ambitious as Lucifer and as cold as a Lizard. Not to be missed ...enjoy #CorbynbyChristmas.
Posted by Any Human Heart at 13:43