The Psychology of Fascism

The Psychology of Fascism 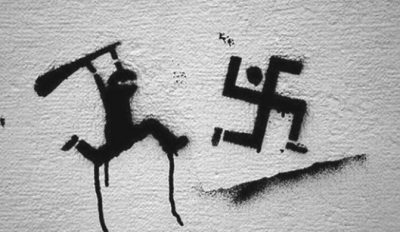 The continuing rise of fascism around the world is drawing increasing attention particularly as it takes firmer grip within national societies long seen to have rejected it.
Some recent studies have reminded us of the characteristics of fascist movements and individuals, particularly as they manifest among politically active fascists. For example, in his recent book How Fascism Works: The Politics of Us And Them Professor Jason Stanley has identified ten characteristics shared by fascists which have been simply presented in the article ‘Prof Sees Fascism Creeping In U.S.’
These characteristics, readily evident in the USA, Europe, Israel, Saudi Arabia, Myanmar and elsewhere today, include belief in a mythic (false) past, propaganda to divert attention and blame from the true source of corruption, anti-intellectualism and a belief in the ‘common man’ while deriding ‘women and racial and sexual minorities who seek basic equality as in fact seeking political and cultural domination’, promotion of elite dogma at the expense of any competing ideas (such as those in relation to freedom and equality), portrayal of the elite and its agents as victims, reliance on delusion rather than fact to justify their pursuit of power, the use of law and order ‘not to punish actual criminals, but to criminalize “out groups” like racial, ethnic, religious and sexual minorities’ which is why we are now ‘seeing criminality being written into immigration status’, and identification of “out groups” as lazy while attacking welfare systems and labor organizers, and promoting the idea that elites and their agents are hard working while exploited groups are lazy and a drain on the state.
In an earlier article ‘Fascism Anyone?’, published in the Spring 2003 issue of Free Inquiry Magazine, Professor Laurence W. Britt identified fourteen shared threads that link fascists. These include powerful and continuing expressions of nationalism, disdain for the importance of human rights, identification of enemies/scapegoats (such as communists, socialists, liberals, ethnic and racial minorities, traditional national enemies, members of other religions, secularists, homosexuals and ‘terrorists’) as a unifying cause, obsession with national security and avid identification with the military, sexism, a controlled/compliant mass media that promotes the elite agenda, a manufactured perception that opposing the power elite is tantamount to an attack on religion, corporate power protected by the political elite while the power of labor is suppressed or eliminated, disdain for intellectuals and the arts, expanded police power and prison populations in response to an obsession with the crime and punishment of ordinary citizens (while elite crimes are protected by a compliant judiciary), rampant cronyism and corruption, and fraudulent elections defended by a judiciary beholden to the power elite.
Offering a more straightforward characterization of fascism in the US context, which also highlights its violence more explicitly than the characterizations above, the eminent Norwegian peace research scholar Professor Johan Galtung explains it thus: ‘US Fascism? Yes, indeed; if by fascism we mean use of massive violence for political goals. US fascism takes three forms: global with bombing, droning and sniping all over; domestic with military weapons used across race and class faultlines; and then NSA-National Security Agency spying on everybody.’ See ‘The Fall of the US Empire – And Then What?’
Among other recent commentaries, one draws attention to a recent fascist gathering in the USA – see ‘Davos For Fascists’ – another to the ways in which fascism, under various names, is being effectively spread – see ‘How the new wave of far-right populists are using football to further their power’ – and another warns of focusing too narrowly on one issue and missing the wider threat that fascism poses. See ‘Fascism IS Here in USA’.
In any case, for those paying attention to what is happening in places like the United States, Europe, Israel, Saudi Arabia, Myanmar and elsewhere, it is easy to see that the rush to embrace fascism is accelerating.
But why? Surely, in this ‘enlightened’ age, notions such as freedom, democracy, human rights and equality are deeply embedded in our collective psyche, particularly in the West. We believe that elections should be, and are, ‘free and fair’ and not determined by corporate donations; we believe that the judiciary is independent of political and corporate influence. But are they?

Note to readers: please click the share buttons above. Forward this article to your email lists. Crosspost on your blog site, internet forums. etc.
Robert J. Burrowes has a lifetime commitment to understanding and ending human violence. He has done extensive research since 1966 in an effort to understand why human beings are violent and has been a nonviolent activist since 1981. He is the author of ‘Why Violence?’ His email address is flametree@riseup.net and his website is here. He is a frequent contributor to Global Research.
Posted by Any Human Heart at 16:48