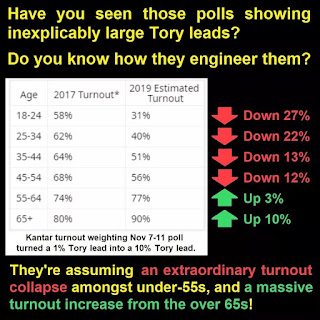 Tuesday electoral thoughts...I sense almost subconsciously a faint bat squeak of fear almost imperceptively rise in intensity and cadence across sections of the establishment. The Telegraph on one hand talk of the Tory lead in the polls yet on the other warn want of the growing threat of the 'demons' of Momentum. The warning is clear as Corbyn looks like the Prime Minister and odd ripples run around even the CBI conference. The fear is palpable.

As the odd weighing of samples in opinion polls is exposed I notice in a couple the Labour vote creeps up to 32 or 33. I also notice in the same polls the Fib Dems fall back to 13 or less.
Locally and anecdotally local activists report good responses on the door steps. As the request for posters on stakes begin to go up through Ystradgynlais. This is very different to the August 1 Brecon and Radnor by election. The dramatic victory in St Mary's Ward last Thursday with a Labour gain from the Tories show the growing trend of the Labour campaign. And as I stare at the entrails and the runes of electoral calculus, as I calculate the correct weighing of samples from the 2017 I sense Labour draw level . Around the country the numbers of Labour activists grow in Chingford and Uxbridge. In Abercraf and Glanrhyd the Labour members and voters sense something half seen yet growing in intensity. And above it all the bst squeak of fear raising in intensity continues amongst the Tories. Then a sick feeling begins in the stomachs and the guts of our rulers as they remember that tonight a bumbling Etonian Bullingdon bully faces a debate with a calm polished and confident

Corbyn faces a debate that will reveal his true nature. As the Furies of his past surround Johnson from Accuri to his racist language. As the monarchy is revealed through its princelings in all its patriarchy and unthinking racism the ruling class in its ignorance is exposed. And then on Thursday we await the Labour transforming manifesto more powerful even than that of 1945. As more register daily and hourly to vote amongst those under the age of 35 we see that change is coming. The debate is coming and the Tory fear rises to screaming pitch worthy of the Nazgul..and there are still twenty three days to go. And as I write I hear Alistair Campbell a product of past history shift to the merits of the Prince Andrew interview as Campbell gives his advice to the Royal family without commenting on the sexism, patriarchy and casual racism of the institution of monarchy. Campbell who had been to Epstein flat in New York now finds himself desperate for relevance moves to the right by defending the power of English snobbery and of the touching of the cap. When sexual abuse is spun as conduct unbecoming and the fascism of normalcy is crafted by the likes of Campbell. Yep... change is coming and they are very afraid, very; very afraid. The sense the threat to their way of life and power 'yea even unto the middle ages" Change is coming and they know it ...as the paradigm shifts and buckles...
Posted by Any Human Heart at 13:25