Don't let yourself be put down. 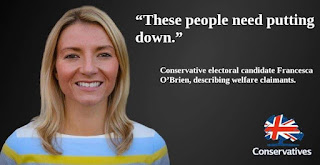 I observed the family picture of the Conservative Party candidate for Gower it reminded me of a picture from the "Janet and John" book that helped me learn to read some 58 years to go. There was a picture of Father, a man in a business suit with mother outside of their 'castle'. A young child with blonde hair nestled in mother's arms. Gender was binary, the house prosperous and the young child had an almost Aryan look. This was the Tory. candidate who felt as a joke that people on benefit should be "put down" . I have met Tories like this many times. They have a curious view that they are all "individuals" yet when challenged or analysed they come out with the same arguments, prejudices and attitudes. They will tell you that conservatives are more intelligent than other voters and that it's really all about envy. When challenged on facts they will exhibit a shocking lack of collective understanding and cultural blindness . They will tell you that a family budget is a model for the national economy, without realising that the family unit cannot create currency or import and export produce they won't realise that the family is no longer the basic unit of society. They won't realise that's it's the poor who pay and contribute the most to the community. They will celebrate the millionaire without understanding that very little of their money builds the economy and the community.

Those of us who have sat with the broken in courts and tribunals in which the full weight of the establishment and the state has been trained on both us and them know differently to the "Janet and John" Tories. It's easy to run and hide from reality yet that is the attitude that leads to the joke to "put them down" . The truth is that we can no longer live in a society where the powerless and the poor are excluded and made to feel guilty for claiming benefits. We either quickly move to a citizens income where you are recognised as a full member of society because you live here and not because of what you appear to be or what your occupation is. The only other solution is the nightmare of the 1930s and the death camps and the approach of T6. All people are first class and it is second class services that should be abolished. It's time to celebrate the excluded and the outcast and to become inclusive and respectful.

There is no middle ground my dear Fib Dems. There never was it's either socialism or Barbarism. As the Labour vote starts to climb even outside of purdah it becomes clear that this is far more than a Brexit election public services and health are forcing themselves to the political surface. We can be put down metaphorically, symbolically and through force and it is simply explained in the 'humour' of the Tory candidate for Gower. It is no laughing matter and no apology can remove the darkness of post modern fascism spilling out our across the land. It's time to stop it now.
Posted by Any Human Heart at 12:51