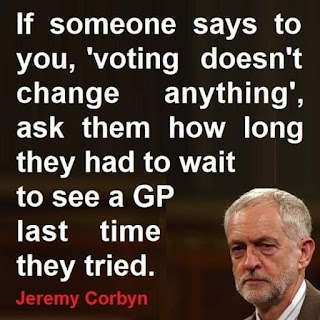 While the fanatics of no deal and the FBPE each experience the realisation of Schridingers Corbyn that be cannot be both remain and leave simultaneously save by their own projections and displacements the election runs on... And on the second week begins a trend is detected Looking back over the last few days we see the Fib Dem vote begin to start recording levels of 14% or 16% while Labour begin to reach the upper twenties at around 26% or 29%. The Tories between 34% and 39%. Evidence from You Gov tells us that only 31% of the Fib Dem vote are certain to vote for them while 29% of their vote admit they may change. The other parties double this certainty to vote for their party and halve the possibility of changing their mind. It's quite clear that as time moves on of the 2,500;000 newly registered voters nearly 60% are under 35 while only 7% is over 65. As Jo Swinson is exposed on Television for fiddling very small electoral samples to lie politically we see both her ambition inexperience and her vast ego. As Nigel Farage once more flees from another electoral humiliation we incredibly see an ego greater than Swindleson and even more delusional than her shrill tones.

The Sunday Times poll shows a Labour bounce of around 6%. In the Gower constituency the Tory Party candidate is shown to have joked about putting down those on benefits in an article in 2014. It was Freud long ago that commented about the relationship between 'humour" and the unconscious. It is therefore quite clear the thoughts that inhabit the Id of this Tory candidate and of the Johnsonian Tory Party in general. The shadow of the Brexit Party worsens even more as the street gangs of the DFLA and EDL come more every day to resemble the SA. The social media cultural wars intensify and as it becomes clear that only Labour will give a confirmatory vote and a people's choice as opposed to the "Calvinists" and the "Jesuits" of Swindleson and Johnson. As public services become more debated and discussed, as Trump intervenes even more so it's clear that the election becomes clearly a two horse race. It's also clear that the union is dead and as 20,000 rally in Scotland for independence and a border poll nears in Northern Ireland and as independence rises in Wales . I wonder if SFwill become the largest party and take up their Commons seat as the lead for Irish reunification grows. As Professor John Curtice says that predictions are difficult and the outlook uncertain As Labour activists pour onto the streets I get and hear anecdotal evidence that may suggest that the excellent Dinah Mulholland will storm Cerdegion running between the Fib Dems and Plaid.
The election becomes uncertain and many possibilities develop. It's Monday and speculation and thoughts are varied. I glance around the bus and see those asleep or on their phones . What secrets?, what fears of the future are hidden there? How will they vote? No one knows as 38 long days stretch on into December as the winter darkness grows and anxiety and fears surround us all. It's Monday again.
Posted by Any Human Heart at 15:19