Lies, damned lies and statistics...it's in the weight.... 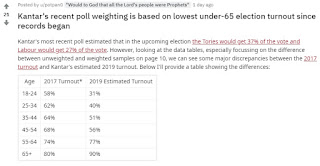 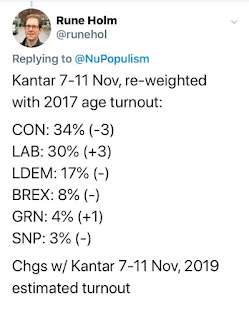 Yesterday it began to appear that the weighing of samples in opinion polls had undergone certain manipulations.. I am somewhat of an anorak for statistics despite my post modern attitudes and qualitative approach. I note that the wieghing of the age groups within a sample has undergone some odd assumptions. Many of the opinion polls have assumed that the turnout for this election will be 10% lower than last time at 59%. They also reduce the proportion of the 18 to 24 age groups by over a quarter and the 24 to 35 group by a proportion of a third and assume that over 90% of the 64+ age group. This seems like a boring anal obsession with statistics but when reflected on it leads to an over estimate of Tory and Fib Dem voters and an underestimate for Labour ones. The assumptions made by our opinion pollsters have assumptions on turnout that have not been experienced for over 50 years since the election of 1964. Many of these "scientific polls" seem to have forgotten the rise of social media. It also seems odd they "forget" the facts that there has been a dramatic rise in the under 30s registering to vote outnumbering the over 60s fivefold. In Uxbridge alone this weekend the #fckboris campsogn registered over 2000 people over the weekend. There is of course nearly a week to go till electoral registration closes so I expect the trend to continue. It's always been my belief that statistics and the models used are reflections of prejudices and assumptions based upon the models we use. They are also a reflection of propaganda and the political discourse of those who are and have a self interest in aTory victory. What was it Marx said about the superstructure? That representation of "facts" are everythiny in persuasion. I notice that Aaron Bastani has too picked up on this point. When you weigh the raw data on the basis of 2017 you find that the Tory lead falls to 4%. I also notice that Survation polling that that is far more aware if these facts shows a significantly smaller Tory lead....odd that.. in the pics below you can see the comparisons of weighting of samples and the application of a realistic model...don't be fooled they are terrified of
Posted by Any Human Heart at 12:53