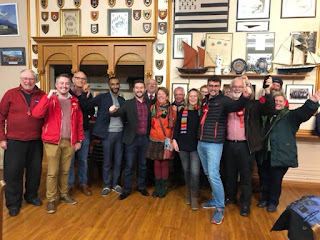 Labour wins St Mary's Ward by election last night by a majority of 100. Last night Labour stormed to victory making Brecon a Tory free zone. The Fib Dems were relegated to a distant fourth place behind Plaid. The full result was Labour 344 Tory 244 Plaid 130 Lib Dem 102 ind 100. Last December a Town Council by election Labour took two seats from the Tories and Fib Dems with majorities of 40 and 9. Last night's majority represents a swing to Labour and an increased turnout from last year. There are now 8 Labour Councillors on Powys County Council and we have now a perfect gender balance in the Labour team. It's a wonderful shot in the arm to Tom Davies and the Labour team in Brecon and Radnor for the general election of December 12th. Labour now has all three county council seats in Brecon and 10 out of the 15 seats on Brecon Town Council. On to the General Election..
Posted by Any Human Heart at 12:49