Election reflections; when the Tories poured across the Welsh border.........

And the epitaph of UKIP will be " A Tory Trojan horse who dragged the electorate to the far right and made a section of the working class vote against the health services, their rights and interests" . It helped make racist language acceptable again and was a stalking horse for a reborn far right' 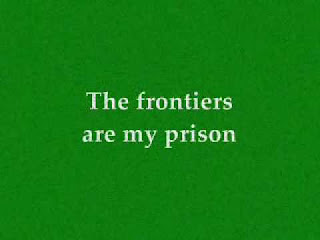 We see fake workers in real factories. The real workers have gone home and are replaced by Tory activists. Simplistic answers used, policies on energy that were mocked last time are taken on board as Tory policy. The anti-hunting association begin to get excited they know that a big Tory majority gives them a chance to return to legalised hunting. In 2002 Theresa May voted against a hunting ban and in the last vote wanted a free vote in the House of Commons. They smell blood and it's not just the fox's. A large Tory majority will threatens animal rights in general. It will threaten all rights and still hypnotised the electorate stares uncomprehendingly ahead. Trusting the Tories on the NHS and public services is like trusting the Nazis on Race relations. I feel like a freedom fighter in an occupied country. I catch myself planning to resist in whatever way I can in the years ahead. I know how to fight back and I know who the collaborators are and will be. There is also deep within a Mr schardenfreude as part of my resistance cell. Lets us resist as best we can in the words of the old song " when they poured across the border, I was cautioned to surrender. This I could not do. I took my gun and vanished." For me it is not my gun, it is my social media and blog. And I will not be overwhelmed by this vile Tory wave of prejudice and propaganda sweeping towards me.....times like this are times of great creativity and great art and books, films are poetry written and after the wave has passed better times will come....

My blocked list is up to 60 suspects . I have been drawing out the right and when I get the usual eloquence such as "cunt' or similar abuse I block them. Keep up the good work and keep insults coming am enjoying myself immensely ...I wonder if I can get to 100. Austria, Holland and France have all turned back the far right it's now Germany's turn in September....where are you grocers of despair ? I am looking to block a few more...you zero net thinkers...come to Martyn

I listen to the Welsh news ...it's the same old right wing rhetoric . For the right it's immigration and Brexit. The old ways keep the masses quiet with bread and circuses . Divide and rule as the Conservatives gobble up UKIP and turn us against Europe.. All the rules of social control are used in this process. Labour and the Greens present well thought out manifestos and policies yet they fall on deaf ears as the electorate brutalised are cut off from their hearts and emotions. This brutality will explode on the streets and as UKIP dies it's racist members will reappear in a new far right. The Tories are playing with fire as .much as the Leavers did last June and we all
risk being consumed