Howard Middleton-Jones from Asclepius meeting His Holiness Pope Tawadros, (the Coptic Pope) who is on his first UK pastoral visit...... Bishop Angelous in the middle..... 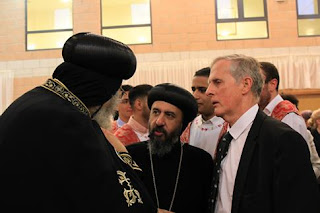 
The liturgy of the Altar Ballot took place on November 4, 2012. The 60-year-old Bishop Tawadoros, Auxiliary Bishop of Beheira, assistant to Metropolitan Pachomios of Beheira, was chosen as the 118th Pope of Alexandria. He then chose the name of Theodoros II. He was formally enthroned on November 18, 2012

Specialising in the Coptic Period of Egypt - the Early Christian period - archaeology, history, conservation and preservation.
Posted by Any Human Heart at 16:21