http://www.bbc.co.uk/iplayer/episode/p04z0n7s/king-charles-iii
I watched the play King Charles 111 last night. It said a great deal about the nature of modern society in terms of ambition, greed and a reflection of these post truth times. As you know I am a keen republican however I felt sympathy for the characterisation of Charles. He really believed in his role and had spent s lifetime waiting. The tragedy of Charles was that while he had been waiting society had become narrow, self serving and intolerant. The political culture of this fictional England suggested the age of Blair and the logical parties were similar. Each content to wait for power in turn. 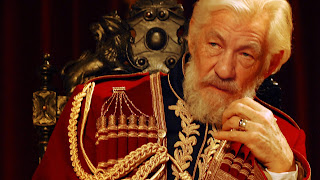 For me the ghost of Diana was very powerful it suggested all that was hidden and unseen. The play also asks the question why have a monarch? The character of William and a cold and ambitious Kate Middleton somehow represented the calculating model of the amoral conservative . They were ambitious to reign and revealed almost a Byzantine family structure. The play left a suggestion of a smoke and mirrors constitution that is truly reflective of the reality.. It was about hypocrisy ambition, human frailty that is all too human..I liked the play it shows why we should be a republic because duty is no longer valuable and that a good man can fooled by the illusion of a role that never was. It left the feeling that Charles was too aware of contradiction and self understanding. Both qualities that do not help you if the job you do is really a con and of no real value. It almost had an echo of King Lear ruling a Brexit Britain.
The play revealed a country of post truth of conspiracy theories and was clearly written prior to Corbyn. It asks questions to us about the myth of the monarchy and the way it's cult is used as a means of social control

https://en.wikipedia.org/wiki/King_Charles_III_(play) LEAR[…] and 'tis our fast intentTo shake all cares and business from our age,Conferring them on younger strengths, while weUnburdened crawl toward death. (1.1.40-43)
Posted by Any Human Heart at 14:08