I Iwas thinking about John Nash,. He was the Mathematician who was killed last year in a car crash in the USA. He was suffering from a paranoid psychosis when he produced his contribution to Games Theory. it was this branch of Games Theory that contributed most to America`s outlook during the Cold War and has probably in turn added to the nature of globalisation in the last 30 years. Is it not interesting that an academic suffering from a paranoid psychosis ( Watch Russell Crowe in the film A Beautiful Mind ). And that this branch of mathematics created in paranoia serves a superpower in the state of collective psychosis.and paranoia. Does our sense of how the world works reflect our inner psychological state Watching leanne Wood of Plaid last night I was mostly impressed. However I know of Leanne`s long connection to the anti war movement. I was very dissapointed that she did not mention once the arms trade . I feel sure that Jeremy Corbyn will mention this today in his speech. The more that the leaders of the main parties do this the more likely it will be that a real discussion on the causes of terrorism and violence will happen


On many issues that the r political right give bland and simple solutioms we find the following.The truth is in at least 2 out of 3 cases we always find that those people who dismiss these simple solutionsare better educated, more tolerant, more perceptive, deeper thinking, younger more aware of paradox and of not knowing within themselves, and are more tentative and less sure. They are less easily fooled, see through scapegoating, reflect more on their life experiences and have travelled more and know more about other cultures and less likely to have a narrowoutlook. of course there are exceptions but ......the truth is that our outlook is shaped by both our psychology and our experience and also by the ability to reflect, change ones mind and to have the capacity to change our ways of thinking........and to be politically more progressive. 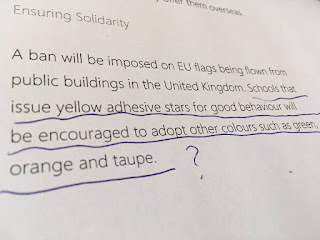 I saw the lynch mob mentality of the UKIP MEPs and activists at their Manifesto launch.They hate the media, the progressive view and the outlook of speculation and of thinking deeply. They were presided over by the archetypal skinhead like Nuttal, . Who were they.? Well I can tell you, Male, bitter and late middle aged. I saw the sneer on Neil Hamilton`s face in the audience debate last night in Wales. He seemed old, out of touch and I heard the baying and bullying form his short cropped hair, bullying male compatriots in the audience. Our mind, our psychology and our attitudes reveal how we would rule and treat the vulnerable. I shuddered last night as I looked into the maw of UKIP.