The Ruffian on the Stairs...being unto Death 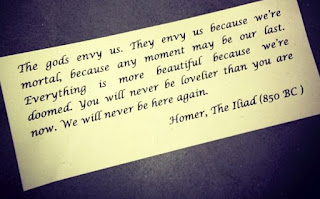 I have always thought we balance between thanatos and eros. We are the tension between sex and death. Eaxh at times frightens us...... perhaps a whole society would be one  where we could discuss both openly and clearly. Societies always repress one at the expense of the other. You may think I am morbid to discuus such things. Anyway here are some quotes, songs and ideas.....

"Why should I fear death? If I am, death is not. If death is, I am not. Why should I fear that which cannot exist when I do?"
—Epicurus
. "If life must not be taken too seriously, then so neither must death"
—Samuel Butler
. "Death must be so beautiful. To lie in the soft brown earth, with the grasses waving above one's head, and listen to silence. To have no yesterday, and no to-morrow. To forget time, to forget life, to be at peace."
—Oscar Wilde, The Canterville Ghost
. "Every man's life ends the same way. It is only the details of how he lived and how he died that distinguish one man from another."
―Ernest Hemingway
. "Life asked death, 'Why do people love me but hate you?' Death responded, 'Because you are a beautiful lie and I am a painful truth."
—Author unknown
. "It is the secret of the world that all things subsist and do not die, but retire a little from sight and afterwards return again."
—Ralph Waldo Emerson, Essays: Second Series
. "End? No, the journey doesn't end here. Death is just another path, one that we all must take. The grey rain-curtain of this world rolls back, and all turns to silver glass, and then you see it."
—J.R.R. Tolkien, The Return of the King
."It is the unknown we fear when we look upon death and darkness, nothing more."
—J.K. Rowling, Harry Potter and the Half-Blood Prince
. "Man alone chimes the hour. And, because of this, man alone suffers a paralyzing fear that no other creature endures. A fear of time running out."
—Mitch Albom, The Time Keeper
. "They say you die twice. One time when you stop breathing and a second time, a bit later on, when somebody says your name for the last time."
—Banksy
. "Death is only the end if you assume the story is about you"
—Welcome to Night Vale
. "I have come to know that it [death] is an important thing to keep in mind — not to complain or to make melancholy, but simply because only with the honest knowledge that one day I will die I can ever truly begin to live."
—R.A. Salvatore, The Halfling's Gem
. "Death is but a door, time is but a window. I'll be back!"
—Ghostbusters II
. "You needn't die happy when your time comes, but you must die satisfied, for you have lived your life from the beginning to the end . . ."
—Stephen King, The Dark Tower
. "Neither the sun, nor death can be looked at steadily."
—François de La Rochefoucauld, Reflections; or Sentences and Moral Maxims
. "The boundaries which divide Life from Death are at best shadowy and vague. Who shall say where the one ends, and the other begins?"
—Edgar Allan Poe, "The Premature Burial"
. "Dying / Is an art, like everything else."
—Sylvia Plath, "Lady Lazarus"
"I do not fear death. I had been dead for billions and billions of years before I was born, and had not suffered the slightest inconvenience from it."
—Mark Twain 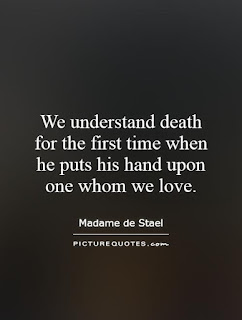 "You'll drift apart, it's true, but you'll be out in the open, part of everything alive again."
—Philip Pullman, The Amber Spyglass
. "Life is so beautiful that death has fallen in love with it, a jealous, possessive love that grabs at what it can. But life leaps over oblivion lightly, losing only a thing or two of no importance, and gloom is just a passing shadow of a cloud."
—Yann Martel, Life of Pi
"How can the dead be truly dead when they still live in the souls of those who are left behind?"
—Carson McCullers, The Heart Is a Lonely Hunter
Posted by Any Human Heart at 15:45