Of Land Tax and the future... vote Corbyn and Green selectively

Of Land Tax and the future... 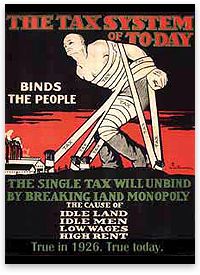 Labour's manifesto commitment to a Land tax is wonderfully refreshing. This is a radical and brave step. The true cue if inequality lays more the ownership of land. The conservative who moans that the left destroys enterprise is strangely quiet on the transfer of land from generation to generation. Land inheritance has nothing to do with enterprise or ability it's is merely about who you were born to. It forms the basis of power and control and it sanctifies aristocracy, monarchy and the whole of the establishment.
Henry George the American thinker saw the truth about the ownership of land. A land tax Haas long been part of the Green Party thinking. The Labour government of 1929 passed a land tax bill in 1931 but the government fell before it was introduced. The Labour government of 1945 passed a similar bill in 1947 but this was abolished by the Tories in 1951 when they returned to power​
Land tax was quietly forgotten as once more the Tories defended privilege and inequality. Wilson's. And Callaghan forgot all about it and Blair and Brown and new Labour were against it because of their right wing views. They had no real interest in social justice and in dealing with the roots of inequality.
Corbyn and Macdonnell however have put together the most serious attempt from the Labour party I have ever seen. The manifesto is refreshing and radical and offers a real choice away from the neo liberal consensus if the last 30 years.
I am very disappointing about Trident and the low priority of other Green issues. However it warms the cockles of my heart . I will vote Labour in Brecon and Radnor I can't bring my self to vote for a bland Liberal Democrat whose leaflet it so lacking in policy that it makes me wretch.
Corbyn also has a long history of supporting animal rights .Macdonnell has the political instincts and organizational skills I have long admired . There is no alternative and as a Green and a Socialist I can not do anything else. It is better to be a rebel than a slave and Corbyn is the first leader of the Labour Party that I can remember who has the qualities, philosophy and outlook that I can admire. I saw the same qualities in Tony Benn and long valued his outlook.
The problem is we live in a society dominated by a right wing press. It's people are hypnotized by prejudice, immigration and Brexit. I never saw that Corbyn would win the Leadership campaign. I hope against all the odds that he can do the same on June 8th. Theresa or Jeremy there is no contest there never was. May has no depth, no awareness, no real values except a lust for power. Corbyn is the opposite in all ways and in all qualities. There is no other choice for the the thinking voter...none at all. It is simply Corbyn and selective Green voting that makes real sense.


A land/location value tax (LVT), also called a site valuation tax, split rate tax, or site-value rating, is a levy on the unimproved value of land. It is an Ad valorem tax that, unlike property taxes, disregards the value of buildings, personal property and other improvements.[1]
Land value tax has been referred to as "the perfect tax" and the economic efficiency of a land value tax has been known since the eighteenth century.[1][2][3] Many economists since Adam Smith and David Ricardo advocated this tax, but it is most famously associated with Henry George, who argues that because the supply of land is fixed and its location value is created by communities and public works, the economic rent of land is the most logical source of public revenue.[4]
A land value tax is a progressive tax, in that the heaviest tax burden would fall on the wealthiest.[5][6] Land value taxation is currently implemented throughout Denmark,[7] Estonia, Lithuania,[8] Russia, Hong Kong, Singapore, and Taiwan; it has also been applied in subregions of Australia, Mexico (Mexicali), and the United States (e.g., Pennsylvania).

In his best-selling work Progress and Poverty (1879), Henry George argued that because the value of land depends on natural qualities combined with the economic activity of communities, including public investments, the economic rent of land was the best source of tax revenue.[4] A land value tax is said to be a progressive tax, in that the tax burden falls on the owners of valuable land who ostensibly have higher incomes, and because LVT cannot be passed on as higher costs or lower wages to tenants, consumers or workers.[5][6] The philosophy that natural resource rents should be captured by society is now often known as Georgism. Its relevance to public finance is underpinned by the Henry George theorem.

The value of land (and many other macro-economic quantities) can be expressed in two ways. Land value is directly related to the value it can provide over a certain period of time, also known as ground rent. The capitalization of this ground-rent by the land market is what creates land prices, the other measure of land value. When ground-rent is redirected to the public, through LVT for example, the price of land will decrease, holding all else constant. The rent charged for land also decreases as a result of efficiency gains from the ad valorem aspect of LVT.
Land that is not desirable enough for use at a given time is called marginal land. Land value tax causes the quality of marginal land to improve while also decreasing in rent, as explained by Ricardo in 1816.

A supply and demand diagram showing the effects of land value taxation. If the supply of land is fixed, the burden of the tax falls entirely on the land owner, with zero or even negative deadweight loss.
Most taxes distort economic decisions and suppress beneficial economic activity.[9] LVT is payable regardless of how well or poorly land is actually used. Because the supply of land is essentially fixed, land rents depend on what tenants are prepared to pay, rather than on landlord expenses, preventing landlords from passing LVT to tenants.
The direct beneficiaries of incremental improvements to the area surrounding a site are the land's occupants. Such improvements shift tenants' demand curve to the right. Landlords benefit from price competition among tenants; the only direct effect of LVT in this case is to reduce the amount of socially generated benefit that is privately captured (as an increase in the land price).
LVT is said to be justified for economic reasons because it does not deter production, distort markets, or otherwise create deadweight loss. Land value tax can even have negative deadweight loss (social benefits), particularly when land use improves.[11] Nobel Prize-winner William Vickrey believed that "removing almost all business taxes, including property taxes on improvements, excepting only taxes reflecting the marginal social cost of public services rendered to specific activities, and replacing them with taxes on site values, would substantially improve the economic efficiency of the jurisdiction. A positive relationship of LVT and market efficiency is predicted by economic theory and has been observed in practice

Fred Foldvary stated that the tax encourages landowners to develop vacant/underused land or to sell it. He claimed that because LVT deters speculative land holding, dilapidated inner city areas return to productive use, reducing the pressure to build on undeveloped sites and so reducing urban sprawl.[14] For example, Harrisburg, Pennsylvania in the United States has taxed land at a rate six times that on improvements since 1975. This policy was credited by mayor Stephen R. Reed with reducing the number of vacant structures in downtown Harrisburg from around 4,200 in 1982 to fewer than 500. LVT is arguably an ecotax because it discourages the waste[clarification needed] of prime locations, which are a finite natural resource.[
LVT is an efficient tax to collect because unlike labour and capital, land cannot move to escape tax.
Many urban planners claim that LVT is an effective method to promote transit-oriented development.[19][20]