A guide to the American Midterm elections

(CNN)Millions of voters will go to the polls across the US on Tuesday, but they won't be picking a president. The impact of the midterm elections, however, could be almost as significant.
President Donald Trump isn't on the ballot, but the results will be a referendum on the polarizing US leader, his policies and the Republican politicians who have tied their fortunes to his. President Trump could have more power or less in Washington by the end of Election Day.
The elections are on November 6, but lots of people will have already voted by then because early voting is a thing in the US, where about 40% of ballots were cast before Election Day in 2016.
Here's everything you need to know about the US midterm elections.
What are the US midterm elections? Why so much interest in an election that doesn't involve picking a president? Which political parties are involved? What are some of the top issues in this election? What does this mean for the rest of the world? What are the possible scenarios? What are some of the marquee races? And will history be made? What happens immediately after the midterms?

What are the US midterm elec

Many of us are  RE familiar with  the US presidential elections, which are held every four years and are the most closely watched political contests in the world. But another slew of elections -- House and Senate races, governors' races -- are held smack in the middle of the President's term, hence the word "midterms." All 435 seats in the House of Representatives will be voted on during the midterms, because members run every two years. Thirty-five seats in the 100-member Senate (members serve six-year terms) are on the ballot this year as well. So are the governorships in 36 states.
Why so much interest in an election that doesn't involve picking a president?
There's a lot at stake for President Trump. The party that ends up in control of Congress can make the President's life a breeze or a nightmare during the last two years of his term.
Which political parties are involved?

Officially, a bunch of them, but really in America, every election comes down to a battle royale between just two parties: the Democrats and the Republicans. For much of its history, the US has had two dominant parties that compete for the White House and seats in Congress. This is primarily because in American elections, it's winner-takes-all for each seat. In a few countries with parliamentary systems, political parties win seats if they get a certain proportion of the overall vote and can even strike deals to cobble together coalition governments. Not so here.
And if you've ever wondered why Republicans have an elephant symbol and Democrats have a donkey, here's why: political cartoons.
Political cartoonist Thomas Nast popularized elephants as symbols for the GOP way back in 1874, when he used the jumbo-sized animal to depict the GOP vote in a drawing in Harper's Weekly. Democrat Andrew Jackson started using a donkey in his presidential campaign ads in 1828, after his critics started calling him a "jackass" for his populist views. Years later, Nast drew a donkey in another political cartoon and, voila, a Democratic symbol was born.
What are some of the top issues in this election?
Health care, the economy and immigration. That trio of issues -- in that order -- is what's on voters minds as they head to the polls, according to this CNN survey from earlier this year. Immigration, just like it was in 2016, is an especially big driver for Republican voters. They have responded positively to President Trump's calls for immigration crackdowns and his desire to build a wall on the southern US border.

What does this mean for the rest of the world?
The results of the midterms will likely change how President Trump is perceived by other world leaders. A strong showing for Republicans would give the impression that Trump has a firm grip on his country, making the President and his "America First" agenda look reaffirmed on the world stage. Trump would more forcefully push for changes in how the US deals with EU and NATO allies. And he might challenge the Chinese more forcefully on economic trade issues or territorial disputes in the South China Sea.
If the Democrats take the House, the Senate or both, Trump would look a lot weaker. His administration could be virtually paralyzed by all the investigations the Democrats are expected to bring if they regain power. Trump's counterparts in other world capitals, from Moscow to Paris, would be emboldened to further their own self-interests at the expense of the American President preoccupied with problems at home.

This election is a referendum on the current occupant of the White House. Depending on what voters decide to do with Congress, Trump may approach the last two years of his current term with the wind at his back or headwinds to his face.
So what happens if ... 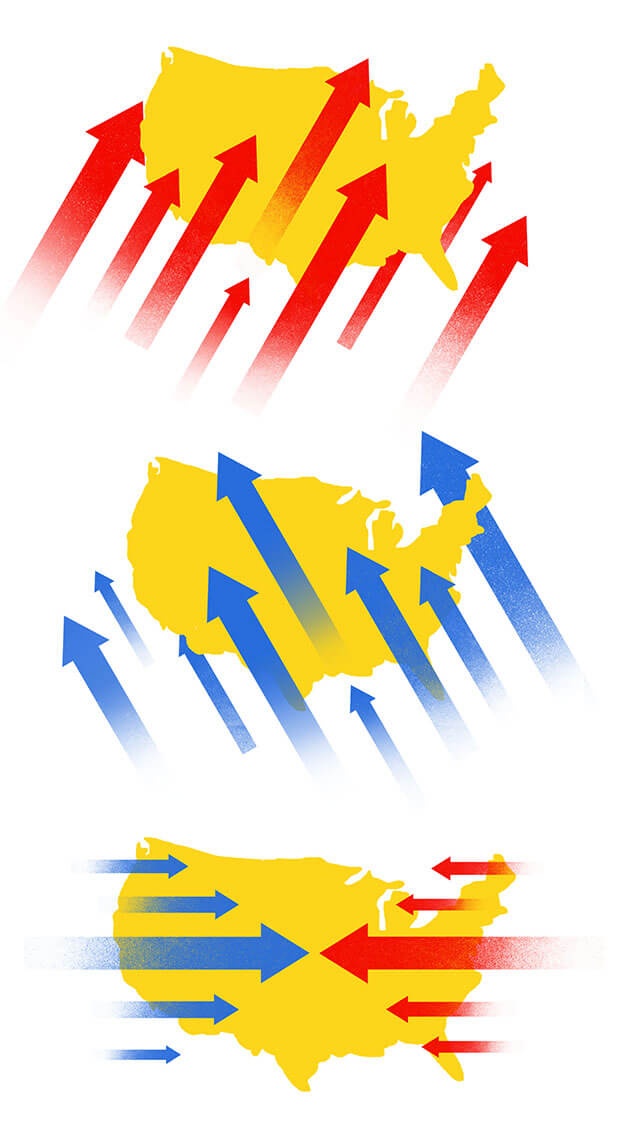 ... the Republicans win the House and Senate?
Trump would be emboldened. He would say, once again, that he and his party proved the pollsters wrong. The threat of new House or Senate investigations into members of his administration would be greatly reduced. Trump and his party would push hard for more items on their wish list: money for the border wall; completely dismantling Obamacare and perhaps a second tax cut. And a GOP-controlled Senate would confirm more conservative judges to the federal bench -- which may end up being Trump's biggest legacy.
... the Democrats win the House and Senate?
This would be the nightmare scenario for Trump. The Democrats would take full advantage of the "checks and balances" of the Constitution. A Democratic Senate might force Trump to nominate more middle-of-the-road judges, and his "Make America Great Again" agenda would be dead in the water in the House.
.
.. the Democrats win the House and the Republicans keep the Senate?
This legislative mix is considered the most likely result of the midterms. But there are still areas where the two sides could get things done together. A lot of House Democrats represent districts that are close to Trump's position on trade, so some political deals could get done there. Trump's proposed replacement for NAFTA, which Congress is likely to vote on next year, will be a good test of this under a split scenario.

What are some of the marquee races? And will history be made?

There's a record number of women running this year, so there's a good chance they could make historic gains on election night. And three gubernatorial races could put a trio of African-American candidates in the governor's mansions of three states for the first time. Democrat Ben Jealous faces an uphill battle against incumbent GOP Gov. Larry Hogan in Maryland, but Democrats Stacey Abrams (in Georgia against Republican Brian Kemp) and Andrew Gillum (in Florida against Republican Ron DeSantis) are in competitive contests.

What happens immediately after the midterms?
After the election, there will be a so-called lame duck session in Congress, which starts in mid-November. Those lawmakers will deal with some pretty big issues -- mainly with a showdown (and possible government shutdown) over funding for Trump's proposed border wall. The new Congress convenes in January.
Posted by Any Human Heart at 20:08