Bonfires in South Norwood and thoughts on a November morning..... 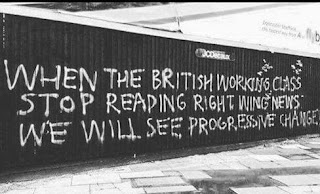 Often on these dark mornings I glance out from the bus windows as I travel from Ystradgynlais to Swansea and particularly in the last few months I see my Grandfather in my reflection on the bus window. Wilfred Earnest Hazlewood was in the trenches of World War 1 over one hundred years ago. It was a Europe riven by nationalism, the millionaires of that time were arms dealers as they are now. The ruling elites were sacrificing the white working class of Europe on the altars of war. In Wilfred's lifetime there were two wars, the building of the welfare state, the building of the European community. He always kept faith in a simpler more decent world and died before the coming of Thatcher and her championing of hyper capitalism that she disguised in pseudo family values. This time again as crude nationalism rises the white working class are are being led back to the sacrificial altars hypnotised as they were before. Marx was right all along and its time to take off the mask and see the Holy Trump and the blessed Tommy for who they really are.

Last week I blocked over 20 people on Facebook and more yesterday tgat I have had enough of ..So many have fallen to the Pied Pipers trance-like as they marched to the high altar.......clinging to their God and Nationalism.In Britain an alleged supporter of the Tory Party in South Norwood who flies a Union Jack in his garden burns an effigy of Grenvel Park on a bonfire to the laughter of his friends and those who call him far right are attacked and denigrated.

These are the monsters of the abyss that walk amongst us. In the USA two clear outlooks can be seen coming into view. One expansive, inclusive and tolerant the other not. These are the legacies of Brexit, Trump and yesterday's Mid terms. It is about to be duplicated here ..
Posted by Any Human Heart at 13:25